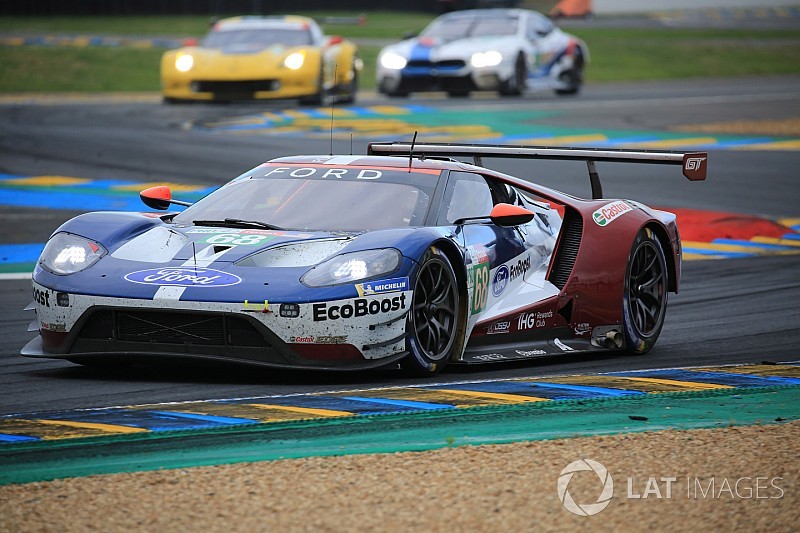 Ford driver Sebastien Bourdais says Porsche's Fred Makowiecki showed "very poor standards" in their late battle at the Le Mans 24 Hours and that it was "unacceptable" he escaped unpunished.

Bourdais and Makowiecki contested the battle for second in GTE Pro during the 20th hour of the race after Andy Priaulx's stop in the #67 Ford moved the Frenchman's #68 car directly behind the second-placed Porsche.

The Dale Coyne Racing IndyCar driver, who won the GT class at Le Mans for the Ganassi-run Ford team in 2016, then caught Makowiecki on the Mulsanne straight, but wide defensive weaving prevented Bourdais from getting past.

Bourdais edged past at the chicane shortly after only for Makowiecki to close the door and when the Ford driver finally made a move stick, he was repassed on the run to the Porsche Curves and forced to put two wheels on the grass.

Makowiecki was investigated for driving standards but received no punishment. When Bourdais was asked by Eurosport if the Porsche battle was fair, Bourdais said: "I don’t know, I’ll let you judge.

"But if that’s fair, then there aren’t going to be very many racecars that are going to finish this race. So no, for me, it’s completely unacceptable."

Bourdais told Motorsport.com on Wednesday that the Balance of Performance was now largely minor adjustments due to the Ford becoming a known quantity, but said that drivers were not "in charge of your own destiny" because of how controlled the BoP was.

He added that BoP and race control's failure to punish Makowiecki was also unacceptable.

"There’s a few things I don’t find acceptable, first of all the BoP, which is clearly completely messed up,” he said,  “and second of all that these kinds of manoeuvres are allowed and race control doesn’t say anything.

"I don’t understand, and I hope Fred is not very proud of himself because it was some very very poor standards for a professional driver."

Dr Frank-Steffen Walliser, Porsche's head of motorsport, spoke to Eurosport and said it was "good racing".

“At the end of the day nobody had an advantage or disadvantage, the cars did not really touch. We have two very professional drivers who did something great for the spectators, and that’s why we are here and racing.”

Di Resta admits he "blew it" in Le Mans crash