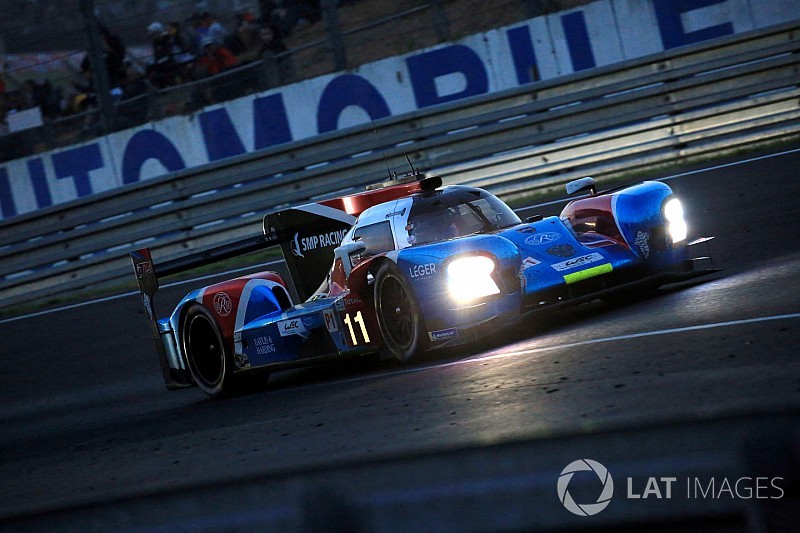 Ex-Formula 1 champion Jenson Button says he hopes his SMP Racing LMP1 team learns from its mistakes after failing to get either of its cars to the finish in the Le Mans 24 Hours.

SMP’s pair of BR Engineering BR1-AERs spent the opening third of the race vying with Rebellion Racing to be best of the non-hybrid runners behind the dominant Toyotas.

However, its hopes of a place on the overall podium were effectively ended when Matevos Isaakyan spun off and hit the barriers at the Porsche Curves after nightfall in the #17 BR1 he shared with Stephane Sarrazin and Egor Orudzhev.

That followed an early electronics issue for the #11 car of Button, Vitaly Petrov and Mikhail Aleshin that left the car trailing by nearly 50 laps from the outset.

Button was at the wheel at the start of the final hour when the car ground to a halt with engine trouble, which marked the #11 crew’s retirement.

“It was a shame we had the issues we had the issues that cost us 45 laps, and then it’s a hard fight from there because you’ve another 21 hours of pushing, knowing you won’t achieve anything apart from finishing,” said Button.

“Vitaly, Mikhail and myself did a good job of pushing the car hard but not too hard, and we had the failure in the end with the engine, which is a shame.

“But I think there’s a lot learnt from this race for everyone.”

Button said the fact SMP was able to take the fight to Rebellion was an encouraging sign for the remainder of the Russian team’s FIA World Endurance Championship campaign.

“The whole team did a fantastic job to come here as do as well as they did,” added the 2009 F1 champion.

”I think we really could have taken the fight to Rebellion in terms of pace, and strategy, and for our first experience here at Le Mans I don’t think that’s too bad at all. We just have to learn from our mistakes.”

Tincknell on Ford vs. Porsche: “We couldn't have done any more"