Dome and Pescarolo Team very satisfied with the Dome S102.5

Pescarolo Team has been able to go through their entire testing schedule. The main objective was to run for the first time the Dome S102.5 fitted with a Judd 3,4 L engine and define different set-ups for the next round of the FIA WEC which will be held in Spa, and for the 24 Hours of le Mans. 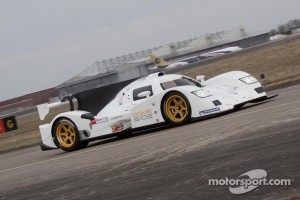 On April 3rd and 4th, testing sessions on the Navarra racetrack were held to define the basic mechanical set-ups of the Dome S102.5 in its 2012 configuration. Forenoon rain during the first day gave us the opportunity to work on traction control settings, which might prove useful both in the Ardennes and in la Sarthe. Then, on a dry track, Seiji Ara has been able to test the Dome S102.5 for the first time. The Japanese driver quickly got along with Nicolas Minassian and his integration with the rest of the team was peerless. After setting a series of quick laps, he declared himself satisfied with the evolution of the Dome 102.5.

The technical team kept on working after moving to the Motorland race track, checking and controlling every element of the car after the first two days of testing. Sébastien Bourdais replaced Seiji Ara for the last test day in Aragon. Mild weather and track configuration more adapted to the characteristics of a LMP1 led to fruitful developments. The two former official Peugeot drivers were highly satisfied with the car behaviour.

Sébastien Bourdais: “ I have clear memories of the 908, and the handling of both cars are very similar. As for the engine….” Nicolas Minassian, the most diligent of our drivers since the beginning of the tests was pleased to reunite with the skillful -albeit relaxed- crew of the Pescarolo Team, and to be part of such a strong drivers line-up.

Henri Pescarolo: “We are extremely pleased with our racing package. After covering over 1100 km during 3 days of testing, the car and the engine have performed perfectly. We have defined mechanical and aerodynamic set-ups that should perfectly fit the requirements of such demanding tracks like Spa and le Mans. Working with the Dome engineers, with whom we share the same passion for motor racing and Endurance, has been a wonderful and fruitful experience.”