Motorsport.com has learned that Ferrari is close to making an announcement regarding a much-rumored return to endurance racing.

Everyone dreams of having Ferrari join the fight in LM P1. Except between a dream and reality, there is a very big step.

For the past week, you haven’t been able to cross paths with anyone involved in endurance racing without the question of a fifth constructor arriving in the top category becoming the topic of conversation. But will it become a reality ?

Of course, organisers at the FIA WEC and the 24 Hours of Le Mans have not confirmed or denied the rumor. And it was amplified that much more when two-time World Champion Fernando Alonso was announced as starter for the 82nd edition of the race. 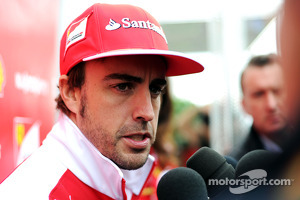 Fernando Alonso, Ferrari with the media

Nonetheless, we have received information that the arrival of at least one new constructor in LM P1 is imminent and that it will come from Italy. No details have been leaked about when this announcement could be made, which could happen as soon as the next few days, during Le Mans week. The ACO and FIA are scheduled to give a press conference on Saturday morning, before the race, but chances are slim that the organiser would announce a new manufacturer.

Most bets are on Ferrari of course, however questions remain: when? With what ? Remember a "hybrid" Ferrari tested at Maranello at the end of 2013. But seeing the Prancing Horse competing as early as 2015 seems unlikely since the current regulations expire at the end of 2016. Although most rumors centered around Ferrari as official factory involvement, some say the Alfa Romeo or Maserati names could be making a return instead. We’ve even heard Lancia, even though the Italian brand has been in a slow decline for years.

Ferrari president Luca di Montezemolo has never hidden his intentions to cross over to endurance racing even though Ferrari has often been hot and cold on the idea and never jumped in head first. Except now, there is Audi, Nissan, Porsche and Toyota in the top class of World Endurance Championship. Perhaps that’s enough to entice other constructors to come…In fact, Ferrari is not the only marque to be rumored to return to LM P1 since McLaren-Honda is also making the rounds.

One thing that is certain is Ferrari is not interested in providing customer engines to private teams, meaning an LM P2 engine program is highly unlikely. However, it's not out of the question that the marque from Maranello could go the Nissan route, with an entry in the 56th Garage at Le Mans in 2015, followed up with a full LM P1 entry in 2016.

We still have to wait a little longer, but the fact that even the most crazy rumors are floating around is a good sign that the LM P1 class is alive and well. Where there is smoke there is fire…

Translated from Endurance-Info with permission by Rainier Ehrhardt