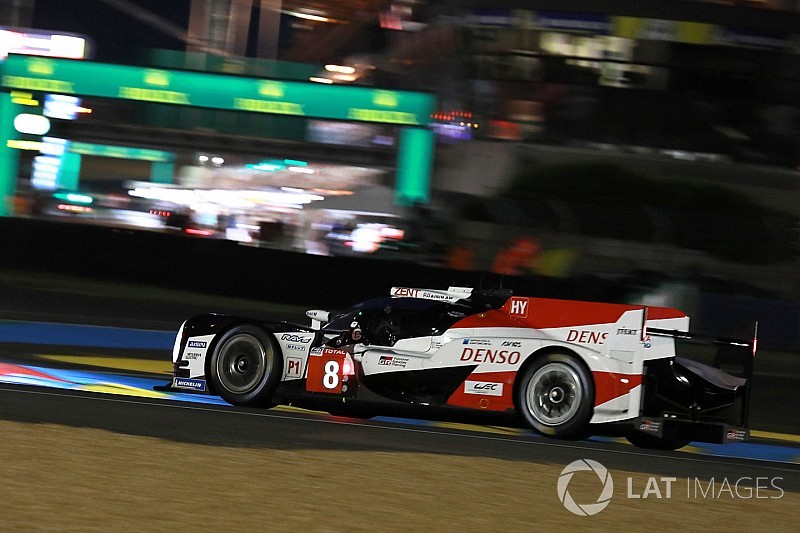 Kazuki Nakajima took provisional pole aboard the #8 Toyota he shares with Fernando Alonso and Sebastien Buemi in Wednesday's first qualifying session for the 2018 Le Mans 24 Hours.

With the threat of rain on Thursday looming, as well as good visibility and low track temperatures early in the two-hour session, the leading LMP1 contenders set their best times on their first flying laps.

It took just one fast lap for the practice benchmark set by the sister Toyota TS050 Hybrid driven by Jose Maria Lopez to be obliterated, with the Formula E driver's 3m19.626s lap comprehensively beaten by Nakajima's 3m17.270s tour.

Nakajima's time remained untouched for the remaining one hour and 52 minutes, with the #7 Toyota falling short of the #8 car's benchmark lap by just 0.107s, although the leading car had several laps deleted for excessive fuel consumption late on.

Buemi then took over from Nakajima before Alonso completed his mandatory five laps in night-time conditions.

Stephane Sarrazin took the #17 SMP Racing BR1 to third, the first of the non-hybrid privateers, and its 3m19.483s lap put it 2.213s adrift of the leading Toyota.

The two Rebellion R-13s were fourth and fifth in class with the #1 car in the hands of Bruno Senna edging out the #3 machine by just 0.283s, with its time set by Gustavo Menezes.

Renger van der Zande caused a slow zone midway through the session when he stopped the #10 DragonSpeed BR1 before the Dunlop Chicane, forcing a recovery of the car after it had set a time good enough for sixth.

Jenson Button completed his mandatory laps aboard the #11 SMP Racing BR1 that went on to provisionally secure seventh in the hands of Vitaly Petrov.

The ByKolles team dropped to eighth after it had two of its laptimes set by Tom Dillmann deleted for excessive fuel consumption.

Manor-Ginetta continued to struggle after it was forced to change an engine in the #5 car following electric problems and it delayed its participation in qualifying.

It took 44 minutes for Mike Simpson to take the #5 car on track before a late improvement in the final six minutes from Leo Roussel lifted it to ninth in class and 11th overall provisionally, almost seven seconds off the leading non-hybrid LMP1 pace.

The #48 IDEC Sport Oreca claimed provisional pole in LMP2, courtesy of a 3m24.956s from Paul-Loup Chatin, as Oreca swept the top five positions. 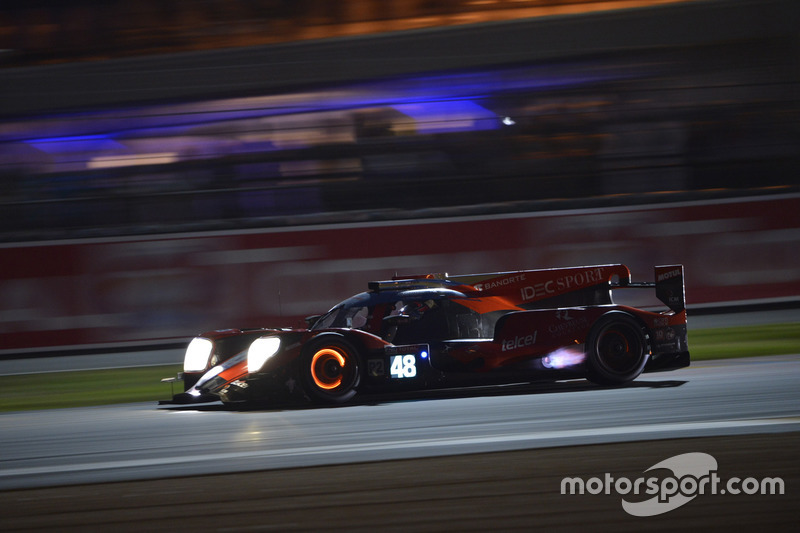 Loic Duval in the #28 TDS Racing Oreca was one of the few drivers able to complete two flying laps before a spin for Gianmaria Bruni's pace-setting GTE Pro Porsche brought out the yellow flags, so took an early advantage before 2014 European Le Mans Series champion Chatin edged ahead by 0.284s.

The Frenchman was the only driver in the top six able to dip under his original time, leaving Duval second, ahead of practice pace-setter Jean-Eric Vergne in the TDS-run #26 G-Drive Racing Oreca, 1.491s off the pace.

Pastor Maldonado was fourth quickest in the #31 DragonSpeed car, ahead of two-time class-winner Nicolas Lapierre for Signatech-Alpine.

Filipe Albuquerque was the best of the rest in the #22 United Autosports Ligier, which survived a trip through the gravel in Paul di Resta's hands late in the session. 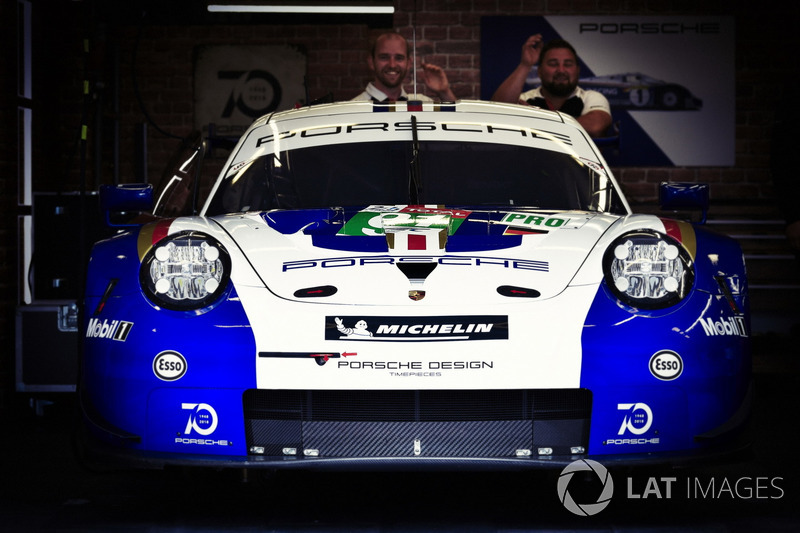 Porsche provisionally locked out the front row in GTE Pro with its pair of retro-inspired 911 RSRs.

Bruni demolished the class practice benchmark on his first flying lap with a remarkable 3m47.504s effort in the Rothmans-liveried car, putting himself 1.593s clear of the opposition.

He subsequently went off at the Dunlop Chicane on his very next lap, ending the #91's session early - but the Italian's time went unbeaten for the remainder of the session.

Bruni's nearest challenger was Michael Christensen, who set a 3m49.097s in the 'Pink Pig' #92 Porsche to go less than a tenth clear of Olivier Pla in the best of the Ganassi-run Ford GTs, the #66.

Dirk Muller made it a provisional all-Ford second row in the #68 car, four tenths further back, while Alessandro Pier Guidi's opening effort in the #51 AF Corse Ferrari proved good enough for fifth ahead of the two CORE autosport-run IMSA Porsches.

BMW enjoyed a more competitive first qualifying session after struggling in practice, as Antonio Felix da Costa managed to get the #82 M8 GTE up to ninth in class with a time 3.075s off Bruni's pace.

Aston Martin on the other hand continued to suffer, its pair of Vantage GTEs ending up 16th and 17th. Alex Lynn's best time in the #97 car was almost five seconds slower than that of Bruni.

Both Aston Martins, as well as the two Corvettes, were slower than the quickest car in GTE Am, the #88 Dempsey-Proton Porsche of Matteo Cairoli.

The Italian driver was 1.202s clear of Matt Campbell in the sister Dempsey-Proton car, with Ben Barker making it a trio of Porsches out front in the #86 Gulf Racing car.

Best of the non-Porsches was again the #54 Spirit of Race Ferrari with Giancarlo Fisichella at the wheel.