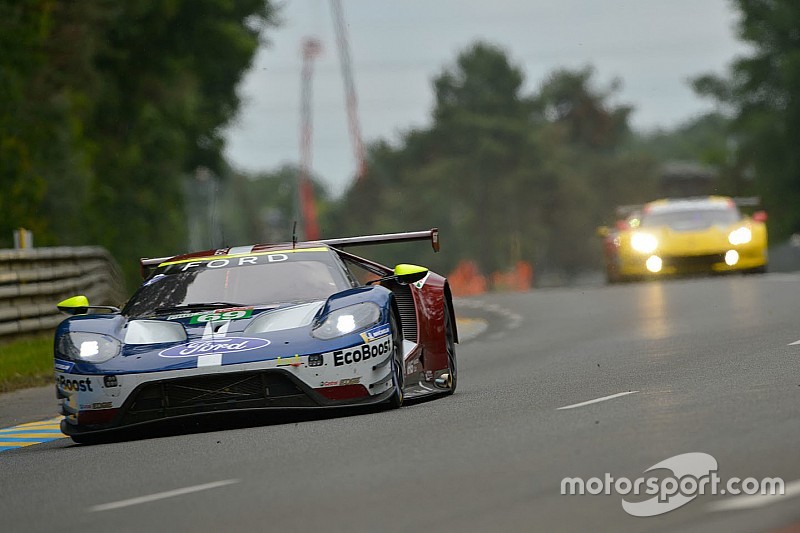 Ford has finalised its driver line-ups for its final appearance as a works team in the GTE Pro class at the Le Mans 24 Hours.

American drivers Billy Johnson and Jonathan Bomarito have been added to the rosters of the #66 and #67 Ford GTs respectively for the FIA World Endurance Championship finale, both reprising their roles from March's Sebring 1000 Miles.

Johnson will be tackling his fourth consecutive Le Mans alongside WEC regulars Olivier Pla and Stefan Mucke, while Bomarito becomes the fourth different third driver for Harry Tincknell and Andy Priaulx in as many years - following Marino Franchitti, Pipo Derani and Tony Kanaan.

Mazda IMSA driver Bomarito will be making only his second La Sarthe start, his only previous appearance having come at the wheel of an SRT Motorsports Viper GTS-R back in 2013.

Neither Johnson nor Bomarito will be taking part in this weekend's Spa 6 Hours, with Ford opting to run its regular two-driver crews for the traditional Le Mans warm-up event.

Ford's remaining two entries at Le Mans will feature their usual IMSA WeatherTech SportsCar Championship line-ups. The #68 Ford GT will be crewed by Sebastien Bourdais, Dirk Muller and Joey Hand, while the #69 car is piloted by Scott Dixon, Ryan Briscoe and Richard Westbrook.

Mark Rushbrook, the boss of Ford Performance, confirmed earlier this month that Ford's works programmes in WEC and IMSA will not continue beyond the current season in each series.

But there remains a possibility of the Multimatic and Chip Ganassi squads continuing to run GTs in future with limited backing from the Blue Oval, a prospect Ganassi has talked up.