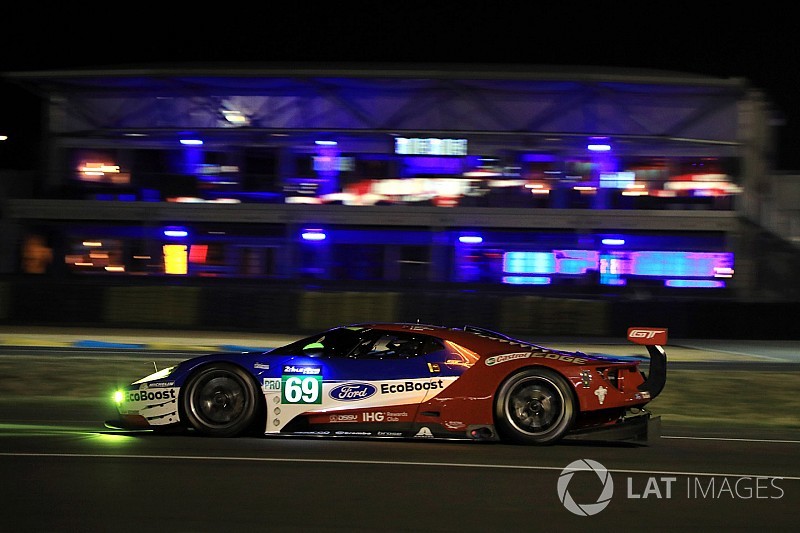 Ford Performance’s global director Dave Pericak has described the speed of the Ford GTs during qualifying for the 85th Le Mans 24 Hours as “disappointing.”

A Ford GT won the GTE Pro class at Le Mans last year, and the four qualified 1-2-4-5 on the car’s Le Mans debut. This year, however, the Chip Ganassi Racing-run quartet will start from fifth, eighth, ninth and 12th.

Said Pericak, “It was overall a disappointing day today.

“The guys gave it their best shot. We were sitting in first place for a little bit, but at the end of the day we didn’t have the speed so we’re going to see if there’s anything else we can do with our setup and get ready to race on Saturday.”

The foursome were led by the #69 car, which will be shared by Scott Dixon, Ryan Briscoe and Richard Westbrook.

Briscoe, who, qualified the car stated: “We definitely had a go at qualifying tonight. It was the first time we ran with new tires and low fuel and we’ve always found this car comes alive when we drop the fuel out of it, so it felt great. The balance was nice.

“We got one of those good laps at Le Mans where you get a tow and don’t get held up with any traffic and piece it together. I was really pleased, but obviously there’s a lot of competition.

“It was quick at the time but we’re fifth now so I think it’s going to be a tough race and hopefully we’ll have the pace.”

Stefan Mucke who qualified eighth in the #66 car he’ll share with Billy Johnson and Olivier Pla, agreed with Briscoe regarding the decent handling of the car but felt his best qualifying efforts were compromised by traffic.

“We have a nice balance in the car now, which is very important here at Le Mans,” said Mucke. “We ran through various programs during the night and did a qualifying run at the end but unfortunately I only had one clear lap then I caught traffic.

“We’re happy we have found a good balance and we now understand the tires a lot better so we are feeling confident for the race.

“It promises to be an interesting race with more high temperatures during the day and cold conditions at night so we will see a big variation in track conditions throughout the 24 hours.”