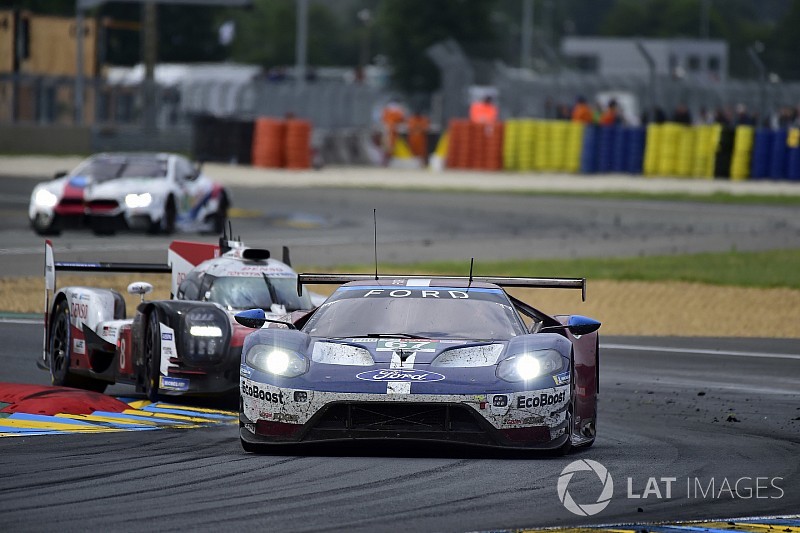 Two of Ford's GTE Pro entries have been hit with post-race penalties in the Le Mans 24 Hours for drivers failing to complete their minimum drive time.

Both Tony Kanaan in the #67 Ford GT and Scott Dixon in the #69 car did not complete the mandated minimum of six hours in their respective cars across the course of the race.

Kanaan completed only five hours and 16 minutes, with the missing time converted into completed laps based on the car's fastest lap in the race.

The result is that Kanaan and teammates Harry Tincknell and Andy Priaulx have lost 11 laps and have therefore dropped from fourth in class to 12th.

Dixon's penalty is less severe, with the #69 car - which spent the final two hours of the race in the garage with an electrical issue anyway - docked two laps and remaining 14th in class.

Two other driving time offences were recorded in other classes.

Leo Roussel did not complete enough time in the #5 Manor Ginetta, which has lost six laps a result - putting it a total of 105 laps off the winning Toyota.

The #28 TDS Racing Oreca that finished fourth in the LMP2 class was docked a lap for Francois Perrodo exceeding the maximum of four hours driving time in any six hour period by four minutes, but this does not affect its finishing position.