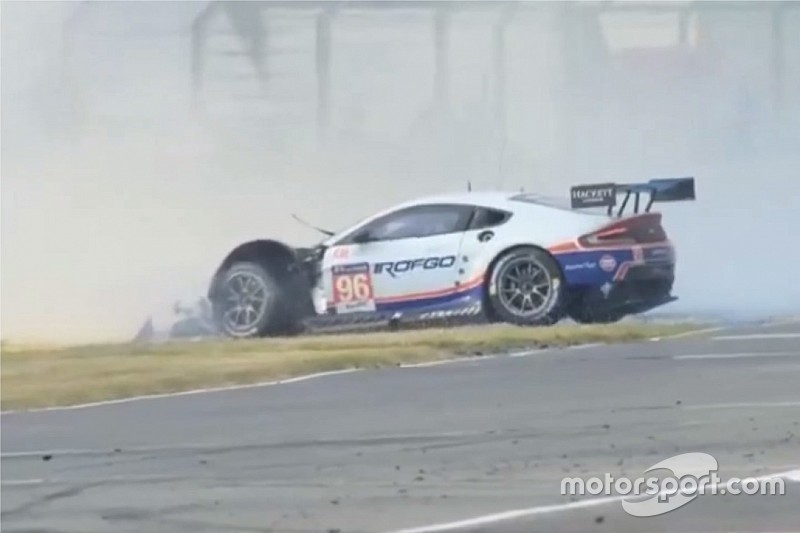 Goethe, who was driving the No.96 Aston Martin Vantage V8 on Sunday morning of the French sportscar classic, left the track between the exit of the Porsche Curves and the Maison Blanche section.

Onboard video evidence suggests Nico Hulkenberg’s race-winning No.19 Porsche 919 Hybrid made contact with the Aston, to spark the huge shunt.

“Though it might appear from the front-on [video] footage taken that I lost control, however, when in reality I was clipped by the LMP1 Porsche  [driven by Hulkenberg], ” Goethe told Motorsport.com.

“He made contact [at 6:36 in the video below], sending me on to the marbles leading to the accident head-on in to a concrete wall. The Porsche went for a tiny gap that was closing all the time and wasn’t really there anymore when he made his move.

"Of course contact was not intentional but all the same the result is what it is.”

Goethe, who was committed to the racing line, continued to describe the accident, which ended his race and put him in hospital for several days where he had surgery for multiple fractures to two vertebra.

“He realised it was tight so he used the kerb more and more,” continued Goethe, who also supplied a photo showing the Porsche had its inside-left wheels over the grass, raising a cloud of dust.

“His right-rear clipped my left-front at exactly the point I was committed to the left [hander] – my car would have been slightly light at that time due to the nature of turning in at high speed, immediately pushing me wide on to the marbles where I had no grip, resulting in the crash.”

“Hulkenberg could have waited until after the exit. It would have cost him maybe half a second, max one second, at a time when he had a comfortable lead in the race.

“I have a lot of respect and admiration for a Le Mans winner like Hulkenberg, however, it is unfortunate that his ill-timed overtaking manoeuvre has somewhat dented this admiration.”

Hulkenberg pitted under the resulting safety car shortly after the incident, and was briefly wheeled back in to his pit box for repairs to the rear of his car.

Goethe’s accident took place at the exit of the final left-hander at Maison Blanche, where cars accelerate up to the final Ford Chicane.

Goethe impacted the concrete wall heavily (crash data analysis suggest an impact at 66G), and has asked the question as to why there was no tyre barrier position at a section of track where accidents have previously occurred.

“The concrete wall that is at the end of that section comes back towards the track in an angle, and is totally unprotected by a SAFER barrier or tyre barriers in a place where you can go off at high speed,” said Goethe.

“I appreciate a lot has been done to improve safety at Le Mans, but as we have seen now there is room for further improvement in places like these.

“Also let’s not forget that the speed differences between LMP1 and GT cars have become bigger than ever.”

Guillaume Moreau suffered back injuries at approximately the same place as Goethe during an accident at the 2012 test day.