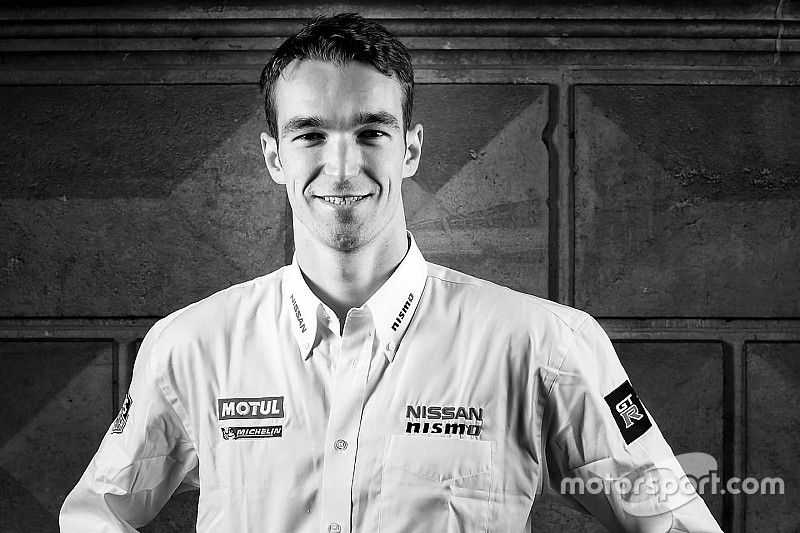 So my second Le Mans 24 Hours race has come and gone and I am already counting down the days until next year!

Of course it was always going to be a tough race for us at Nissan but it was fantastic to get our FIA World Endurance Championship campaign underway and of course to be back at La Sarthe.

The official Test Day on Sunday was quite changeable in conditions so I didn’t clock any laps in the dry but we got in some very valuable wet running and the testing confirmed our suspicion that the Nissan GT-R LM NISMO is pretty good in the wet.

It was all a data gathering experience for us. We stayed out for three days after to practice driver changes and to do some fitness and team building before I headed back to the UK for a few days to relax before going back to Le Mans for scrutineering on the Sunday.

Scrutineering in the Town Centre is always a spectacle and when we had all three cars lined up, with the nine drivers and all the team members, it really made me think what a fantastic effort it was to get everything ready in such a short amount of time by the Nissan NISMO guys.

We were really up against it but the team pulled out all of the stops to make sure we were all there in the best possible shape.

Our paddock hospitality facility had an open area at the front and there was always masses of people outside watching us all getting some practice in on the PlayStation.

We had it set up on the Le Mans track with the actual GT-R LM NISMO and it was quite a sight to see the likes of Jann, Mark, Lucas and Gaetan showing why they won GT Academy!

I was useless but against all odds it was actually Alex Buncombe (or Al Bundy as we affectionately know him) who was P1 for the week. We also had the famous Nissan slide complete with a TAG Heuer live timing system.

After taking too much banter for languishing near the bottom for most of the week, I tried it with full race kit, which proved super slick as I went to the top of the times by 0.01.

This was only beaten at the ‘after party’ on Sunday night when bottles of Heikinen seemed to improve people’s confidence to throw themselves down headfirst!

Onto the serious stuff and Wednesday was another data gathering exercise for us, trying lots of different set up and parts to get us in the best position we could for Thursday night qualifying.

This was definitely the right strategy and it proved so when I set the 12th fastest time overall on Thursday night. We had improved by nearly five seconds from Wednesday and Michael, Al and myself were happy with the progress we were making.

Friday is always a great day at Le Mans as it is the Driver’s Parade and this year was no different. We had about 2000 NISMO cards which we dispatched into the crowd as we went round and it really is a surreal experience to have 150,000 people or so shouting your name or wanting photos, autographs, hugs and high fives!

It also showed what fantastic support Nissan has and there were many NISMO flags, tee-shirts and other merchandise on show!

I woke up on Saturday morning feeling like I had only just arrived at Le Mans and it was race day. It’s a strange feeling heading into the track on the morning of the race.

This is the day you’ve been thinking about all year round, everything has been planned, prepared and organized for this one day and now it’s finally here. I was a bit nervous but by the time we got round to being on the grid I was feeling pumped up and ready to go.

I was starting in the 22 car but unfortunately as not all the drivers were within 110% rule, we were put to the back of the sports-prototype grid meaning I had to start 30th. But that made coming through at the start a good fun.

When the flag dropped, I quickly passed about 10 cars on the first lap and made my way up to 12th by one point in the opening stint. We had split the strategy slightly and by the time I had come in for my second fuel stop I was starting to struggle with the tyres.

We knew from the other cars which direction to go in but it just shows how much testing we were doing when the actual race was going on and the amount we learnt was incredible.

I battled on for my third and final stint and handed the car over to Michael for his first triple stint. This was already the furthest we had been in one outing, so we were into uncharted waters.

Michael completed a faultless triple stint and handed over to Al for his first racing laps in an LMP1 car. Once again, the car ran without issues and the lap times were coming down all of the time.

Al handed the car over to me at 10.30pm with darkness falling and this is when we started to encounter a few problems. We had a few little niggles with some electronics that we had to come into the garage to fix but each time the boys with the laptops were quick to solve the bugs.

The big problem of the race for us came at just after midnight – in total darkness. I was heading down to Indianapolis when suddenly, at just over 210mph, BANG. The bonnet flew off, taking the headlights with it and I had no steering or brakes, hurtling towards the wall.

The debris cleared itself under the car and just managed to get it stopped before hitting the barrier. I was stuck in fourth gear with a front left puncture and everything was black in the cockpit.

I knew if I stopped out on track I would never get it going again so all my focus went into survival mode and to bring this thing back.

I could just about make out where I was going but the big problem was slowing the car down for Arnage and the pit entrance as I was stuck in gear.

I very nearly ended in the wall at Arnage and clouted the kerbs coming into the pits but I made it back and the boys went straight to work to fix it.

It took them about two hours, but considering the damage, that was an unreal effort. Looking at the replays it appeared I hit a tyre carcass, right on the racing line.

I didn’t see it at all, no warning. And at that speed, I’m not sure I would have reacted in time even if I had.

The joy of seeing the chequered flag

We battled on through the rest of the race and the car was just getting faster and faster the further we went. By 3pm on Sunday, we were the last Nissan standing and it was a great feeling when Michael took the chequered flag.

Some people may suggest that we shouldn’t have been celebrating but anyone who has been involved with this project will know that it was a fantastic achievement in such a short space of time and every single member of the team had worked their heart out from day one.

We will be in a different position next year. We learnt so much this year, which will go into the 2016 car. If we hadn’t have come to Le Mans this year, we would never have gained all this invaluable knowledge.

Race mechanics are incredible human beings and I made sure to thank each and every one for all their hard work and late nights after the race. It was time for them to have a week of sleep!

Elsewhere in the race it was great to see four Brits on the top step. Nick Tandy, Matt Howson, Richard Bradley and Oliver Gavin are all great drivers and deserve their place in Le Mans history.

Of course, I was hoping Filipe [Albuquerque] could do it for Audi and he drove his heart out but ultimately had problems costing valuable time.

Next up for me is Red Bull Ring in the European Le Mans Series with the Nissan-engined Gibson for JOTA Sport. They kept our 100% podium record for the season going with a second place at Le Mans and without an early problem would have probably been another win and I was in the garage with Simon cheering them on as much as I could.

The dream team is ready to go one better than our second place in Austria last year and keep that podium run going strong!