Following his bike accident last August, Anthony Davidson will finally not be able to drive the Peugeot 908 at the Silverstone 6 Hours this week-end.

It is a difficult decision to make but it is a wise one.

The British driver broke his left collarbone after he was involved in an accident whilst training on his road bike. While his recovery has been fast, it isn’t complete enough to allow him to race in the best conditions for this weekend 6 Hours. "Of course I can only be disappointed as it is my home race," says Anthony Davidson. "It is a difficult decision to make but it is a wise one. Now I get more time to recover properly and I can prepare the end of the season in a better way."

"Anthony has recovered almost 100%, adds Pascal Dimitri, Peugeot Sport Team Manager. However, we do not want to risk anything for him, as he needs to recover all his sensations, and for Peugeot in its chase for the ILMC title. We need him to race in Petit Le Mans which is coming right after Silverstone."

Consultant on the Peugeot WebTV 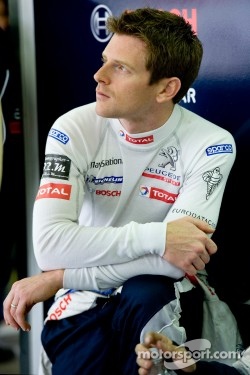 Anthony Davidson will be in Silverstone at the 6 Hours to meet his fans, spectators and the medias during the event. Also he will be live on the Peugeot Web TV set to comment on the race, analyse and help understanding the race behind the scenes of the Team Peugeot Total. The WebTV coverage will start on Sunday 11th September from 10H35am (UK time) for a race start at 11H35 (UK time).

The 2 cars and their drivers

Simon Pagenaud and Sébastien Bourdais will be lining-up to drive the Peugeot 908 N°7. There will be no changes to the car N°8 ran by the duo Franck Montagny and Stéphane Sarrazin.