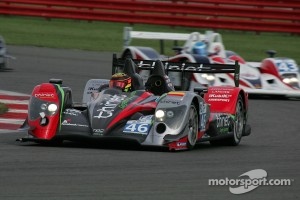 After dominating two of the three practice sessions of the 6 Hours of Silverstone, the four ORECA 03s entered in the LMP2 class realised a good group performance in qualifying session : second and third rows on the grid, and held the provisional pole for a time. TDS Racing (Thiriet/Bèche/Firth), Race Performance (Frey/Meichtry/Rostan), Signatech-Nissan (Ordoñez/Mailleux/Vernay) and Boutsen Energy Racing(Kraihamer/Ebbesvik) will take the start tomorrow with victory in their sights.

Consistently running up front during the practice sessions, the ORECA 03 signed the fastest time of the two Friday sessions before finishing in the top 3 in the final test on Saturday morning. As the gaps in laptimes were minuscule, the qualifying sesssion looked to be hard fought. And it was ! Signatech-Nissan, Race Performance and TDS Racing took turns occupying the provisional pole position in a qualifying session that was marked by variable weather. Competitors had to time their runs between rain drops to make a good laptime. At the top of the qualifying order until only three minutes to the end, Jody Firth (TDS Racing) will start in third position, behind Strakka Racing and Greaves Motorsport. For his part, Michel Frey rejoined the race in the last moments of qualifying to take fourth place in the Judd-BMW powered ORECA 03 of Race Performance. Signatech-Nissan and Boutsen Energy Racing are just behind on the third row, in fifth and sixth places.

« The conditions were not easy, » explains Jody Firth, third. « I needed a few laps to heat the tyres, then the rain returned. The ORECA 03 was good, but it wasn’t completely dry when I was behind the wheel. Nonetheless, this doesn’t change our objective : the win. The car reacted well to the different changes we made and it handles well with a full tank of fuel or on worn tyres. We have the ability to win ! »

« You had to be on the track at the right time» adds Michel Frey, fourth. « We rejoined a little too late and I was only able to complete one more lap. Despite this, it’s our best qualifying performance and we are happy with the weekend so far. We’re in the fight. Considering the conditions, strategy will be very important, as will tyre wear. In terms of competitiveness, we could see a podium.

On home soil, Neil Garner Motorsport showed very well. The British team, who shared the fastest practice time with Pegasus Racing, signed the pole position thanks to Phil Keen. Teammed with John Hartshorne and Steve Keating, the English driver didn’t waver during the qualifying session. JMB Racing (Marcelli/Ducote/Moro) qualified second, ahead of Genoa Racing (Kronfli/Mitchell/Grogor) and Pegasus Racing (Schultis/Simon/Schell). The championship leader improved its time but was unable to reach the top 3.

« I know the track well and I was able to find the grip despite the weather, » said Phil Keen, polesitter. « You had to find the right line. I had a scare at the end of the session (spin), but it’s a nice pole, on « my » track, at home. I’m confident for the race. The class is very hard fought ! »

The start of the 6 Hours of Silverstone, fifth round of the ILMC and fourth round of the Le Mans Series will be given this Sunday at 11 :35 a.m. (local time).