With a driver lineup of six Le Mans rookies, all with minimal prototype experience only from the first two Le Mans Series races this season, it was safe to say the customer Kolles Audi R10 TDIs were not expected to be among the front-runners in this ...

With a driver lineup of six Le Mans rookies, all with minimal prototype experience only from the first two Le Mans Series races this season, it was safe to say the customer Kolles Audi R10 TDIs were not expected to be among the front-runners in this year's 24 Hours of Le Mans.

Odds were stacked against them -- besides the driver lineup, these were cars that did not receive much in the way of further development after their time with the factory ended last year. 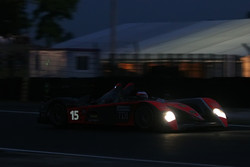 It also didn't help two of the team's regular LMS drivers were not able to run at Le Mans, disrupting continuity within the team. Andy Meyrick was replaced by German Andre Lotterer, a veteran of Japanese Super GT and Formula Nippon just before scrutineering in the lead #14, whilst Michael Krumm is developing a Nissan GT-R in Japan and has ex-Midland F1 test driver Giorgio Mondini in his place.

Mondini was optimistic before the race, despite only running five dry laps total between Wednesday and Thursday. "There have been some improvements, we have the diesel power so should be better for the race," Mondini offered.

Things were further complicated just before the get-go with the #14. Narain Karthikeyan suffered a dislocated shoulder in a bizarre incident, falling over a pit wall en route to a restroom while walking to the grid.

There are no reserve drivers under the current ACO regulations so this left the #14 in an unenviable position of having two drivers -- one who hadn't so much as sat in an R10 before Wednesday -- to do the entire 24 hours by themselves. Meyrick was on hand and providing commentary to the Radio Le Mans booth but he would be a Le Mans rookie as well and could not step in, despite the vacancy.

So it was left to Charles Zwolsman, a former Formula Atlantic champion and ex-Champ Car World Series driver with all of two sports car races under his belt and Lotterer to run. The team has run sixth for the last four hours, an incredible effort given the circumstances.

"Thank you for that," Zwolsman offered as he was just about to begin another three-hour stint starting at about 2:30. "It has been tough but a great run and team effort to this point."

Lotterer had triple-stinted himself and didn't look but a bit drained, and immediately hustled out to the pit wall to watch his teammate.

In the sister #15, the car was up to as high as seventh but had some underbody problems according to Christijan Albers, the Dutch three-year veteran of Formula One.

"Our floor is destroyed, and we're not as fast as Lotterer and Zwolsman," Albers said after his most recent stint. "We'll have to leave it like that. It's difficult to say how we go now, as we're driving a car that is missing a lot of balance."

Albers is co-driving with Mondini and Christian Bakkerud in the #15 R10 TDI. While this run was certainly not expected from the outset, it is a welcome surprise on the leader board and hopefully a trend to continue for the second half of the race.

Zwolsman is currently one lap ahead of seventh place, the #7 Peugeot 908 HDi FAP of Pedro Lamy. Seventh through 10th place are all on the same lap and Bakkerud is currently 10th, though is fighting the issues Albers described.