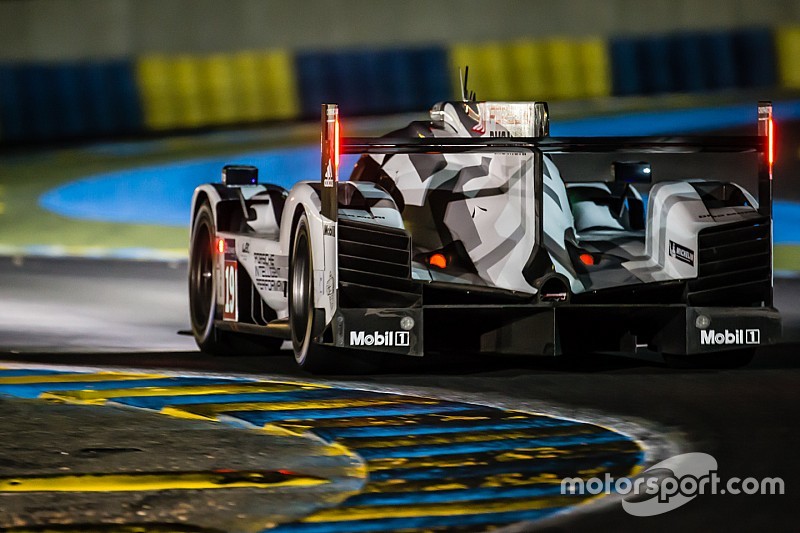 Porsche’s part-time LMP1 racer Earl Bamber led the Le Mans 24 Hours with nine hours remaining, fending off the challenge of Audi regular Benoit Treluyer – but the gap between them remains under a minute.

Bamber continued to underline Porsche’s slight advantage in the cooler conditions of early morning.The Kiwi took over the No.19 Porsche 919 Hybrid from teammate Nick Tandy, and despite losing some initial seconds to the No.7 Audi, he bedded himself in to the rhythm of his first full LMP stint in night-time conditions.

Bamber and Treluyer traded times for much of the 3-6am period, and the gap fluctuated around the one-minute mark.

The Audi briefly took the lead when Bamber pitted and was slightly delayed when he was forced in to an acute position by the Rebellion car in the adjacent pit. The order returned to Bamber’s favour when Treluyer made his own stop a few laps later. At 6am the gap was 55-seconds.

Best of the rest

The No.9 Audi R18 e-tron quattro continued to keep in touch in third place, with Filipe Albuquerque taking over for his second stint at the wheel.

Brendon Hartley was attempting to drag back some of the lost time from the earlier penalty in the No.17 Porsche, which he triggered for overtaking and not respecting the speed limit in a slow zone.

The New Zealander showed remarkable consistency to start a serious challenge to the No.9 Audi before handing the seat back over to Mark Webber at 05.50am.

The top six was filled out by the No.8 Audi and the No.18 Porsche, which had Lucas Di Grassi and Romain Dumas at the wheel respectively.

Toyota Gazoo Racing continued to have a quiet but troublefree run as morning started to break. Mike Conway ran in a lonely seventh in the No.2 Toyota TS 040 HYBRID, while Kazuki Nakajima was at the wheel of the recovering No.1 car.

The two remaining Nissan GT-R LM NISMO entries still circulated in a much-delayed 45th and 46th overall. Incredibly both were on the same lap with Max Chilton leading Michael Krumm.

KCMG were in an even better position in LMP2, as first Nicolas Lapierre and then Matt Howson continued a metronomic pace to lead the No.26 G-Drive Ligier by a lap.

There was drama at 04.50am as the then-second-placed Thiriet by TDS ORECA was hit and spun by Fernando Rees in the No.99 Aston Martin Racing LMGTE Pro car.

Rees had just returned the Vantage V8 to the track after receiving new brakes. Arriving at the first Mulsanne Chicane the Brazilian cannoned in to the hapless TDS ORECA, pitching Tristan Gommendy in to a lurid spin and severely damaging the right rear of the second-placed LMP2 car.

The tall Frenchman made it back to the pits but terminal damage to the rear suspension and gearbox ensured a sad retirement.

This development allowed the No.26 G-Drive Ligier in to second place, while the Murphy Prototypes Oreca-Nissan settled in to the final podium position.

JOTA Sport was creeping closer to the front with Oliver Turvey and then Simon Dolan bringing the Gibson-Nissan back in to contention in fourth place.

A fighting fifth was the No.28 G-Drive Racing Ligier-Nissan. ‘Pipo’ Derani was arguably one of the stars of this period and set a succession of quick laps to reduce the gap to the JOTA Gibson in a battle for fourth position.

With Rees being forced to pit with the badly damaged No.99 Aston Martin, the Chevrolet Corvette of Jordan Taylor looked set to capitalise but at approximately the same time as Aston Martin were changing the brakes, Corvette followed suit.

All this handed the initiative to reigning WEC champions No.51 AF Corse Ferrari 458 Italia which had Gianmaria Bruni ensconced in the cockpit. The Italian needed no second invitation to mount the challenge to defend the crown he and his teammates – Toni Vilander and Giancarlo Fisichella – won last year.

The Aston Martin crew worked wonders to repairs the No.99 car and Rees re-emerged from the pits with a patched up car to place sixth in class.

After a few static hours, the LMGTE Am class was spiced up with a duel between the No.98 Aston Martin and the No.72 SMP Racing Ferrari 458 Italia.

Some impressive laps from Russian drivers Alexei Basov and Victor Shaitar saw the Ferrari come in to contention, but it was the familiar pace of Pedro Lamy that ultimately told, and he quickly built a lead that expanded to over a minute as 06.00 approached.

Webber not to blame for penalty