REBELLION Racing heads to France for the 82nd edition of the Le Mans 24 Hours on 14-15 June in determined mood.

The REBELLION R-One #12 and #13 race cars will make their first appearance in the toughest endurance race in the world, facing very strong opposition from the factory teams of three of the most prestigious car manufacturers in the world, all with hybrid cars : three Audi R-18 E-Tron, winners of the two last editions and defending FIA WEC World Champions, two Toyota TS40-Hybrid, winner of the first two rounds of the 2014 FIA WEC and two Porsche 919-Hybrid, the 18 times Le Mans winners returning with high ambitions.

More than the previous year, reliability will be the main factor for a strong result in the race as the LMP1 cars are carrying a lot of new technologies due to the new regulations. The Swiss team's first aim is to see both cars reaching the checkered flag on Sunday afternoon. Placing the REBELLION R-Ones high in the classification among the top 6 is a reasonable target, reaching the podium would be a fantastic achievement for a private team. 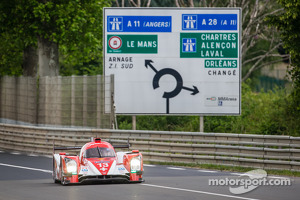 Until now, REBELLION Racing's best achievement at Le Mans 24 Hours is a fourth place in 2012, which prevented an historical 1-2-3-4 from Audi factory team. REBELLION Racing have also achieved three class podiums in the race.

REBELLION Racing is expecting that the latest regulation changes will help the LMP1-L cars to be closer on pace to the Hybrid cars in order to keep the spirit of the new regulations alive and to raise interest from decision makers to increase the number of Private LM P1 teams for the benefit of Endurance racing and the fans.

Among the REBELLION Racing drivers, only 2013 GP2 Champion Fabio Leimer will debut at Le Mans 24 Hours. He successfully qualified for the event after he completed mandatory running during Le Mans Test Day last Sunday. He will drive R-One - Toyota #13 with Andrea Belicchi and Dominik Kraihamer.

Car #12's line-up is also unchanged with the Nick Heidfeld, Nicolas Prost and Mathias Beche trio, winners of the first two rounds of the 2014 FIA WEC in the LM P1-L class.

REBELLION Racing's Le Mans 24 Hours week will start in downtown Le Mans on Monday 9th June with scrutineering commonly called "Pesage", at 14h00 for REBELLION R-One - Toyota #12 and 14h10 for the sister R-One #13. A great opportunity for the fans and the public to meet the drivers and have a close look at the cars.

The 24 Hour endurance epic begins at 15:00 on Saturday 14th June with live television coverage on Eurosport.

Bart Hayden – REBELLION Racing Team Manager: “Since the Test day last weekend, there has been a small change to the regulations to help close the gap to the factory cars and we hope that this will put us into a more competitive position. We're still learning about the R-One cars, but over time we have managed to put some reasonable mileage on to may of the components. We are better prepared than we were when we debuted the cars at Spa last month, but our expectations for the 24 hour race are still only modest. Of course, we will be pushing to the maximum in the hope of staying in a competitive position ready to benefit from any difficulties that others might have. Our own reliability is not totally proven, so we are preparing for a tough race. Nonetheless, we are very excited to be part of this new era of LMP1 racing and are looking forward to putting on a good show."

Scrutineering Day Two: What the drivers have to say

OPINION: Forget the movie Ford v Ferrari, there’s going to be an imminent remake of Porsche v Ferrari – only it’s not going to be on the silver screen but on the racetracks of the world… and the stock market.

Seven-time NASCAR champion and IndyCar sophomore Jimmie Johnson has announced he is to step down from full-time racing in 2023.