The 2014 endurance season, which has already begun in the USA with the Tudor United SportsCar Championship, will go green in Europe this coming weekend.

This weekend the 2014 FIA World Endurance Championship and the European Le Mans Series both kick off on the Silverstone circuit. They are the first steps on the path that leads to the 82nd Le Mans 24 Hours, the high point of the season, which will take place on 14-15 June.

The 2014 endurance season, which has already begun in the USA with the Tudor United SportsCar Championship, will go green in Europe this coming weekend in Great Britain on the Silverstone circuit. On Saturday 19th and Sunday 20th April the first round of the two championships of which the Automobile Club de l’Ouest is the organiser and promoter, the European Le Mans Series and FIA World Endurance Championship, will be held. Many teams entered for the 82nd Le Mans 24 Hours will do battle in the two races.

Everybody is looking forward to the opening round of the FIA World Endurance Championship. Twenty-seven cars will line up on the grid including nine LM P1s. In this category governed by the new revolutionary technical regulations (see below), the three officially entered manufacturers, Audi, Porsche and Toyota, will each run two of their latest prototypes. 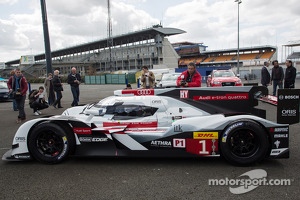 Porsche making its return to top-level competition will be the focus of attention with its 919 hybrids in the hands of redoubtable driver lineups led by ex-F1 ace Mark Webber. The world championship tandem of Tom Kristensen and Loïc Duval in the no.1 Audi, who will be backed up by Brazilian Luca di Grassi after Allan McNish’s retirement from racing, will also be closely followed as will the race debut of the new Toyota TS040 Hybrid whose power output exceeds 1000 bhp!

In LM P1 L, the category reserved for privateers, the Lotus is still undergoing final preparations and will not be at the British circuit, while Rebellion Racing will run its two 2013 Lola-Toyotas as the Swiss team awaits the arrival of its new car.

Following the withdrawal of strakka and Millenium Racing, four cars will do battle in LM P2 with three Oreca-Nissans against a singleton Morgan-Nissan. Three of these cars are flying the Russian flag and one the Chinese colours, which proves the internationalisation of the championship.

In LM GTE Pro the usual top teams will go at it hammer and tongs with works cars entered by Ferrari via the AF Corse team, the 2013 champion, Porsche and Aston Martin. This year RAM Racing is joining in the fight with a Ferrari 458 Italia. At Le Mans the category will be completed by the works Corvettes racing in North America.

There are seven cars in LM GTE Pro, and eight in LM GTE Am, which promises to be the theatre of another Porsche-Ferrari-Aston Martin confrontation between six different teams among them the 8 Star Motorsports squad defending its 2013 title.

The Silverstone 6 Hours, the first of the eight rounds of the FIA World Endurance Championship, will take place on Sunday 20th April (start at midday, 13h00 in France). The previous day the first of the five events in the European Le Mans Series will be held. The 4-hour race starts at 14h30 (15h30 in France).

No fewer than 39 cars are on the ELMS entry list, some fifteen of which should be at the start of the Le Mans 24 Hours. Among the 11 LM P2s, Sébastien Loeb Racing’s Oreca-Nissan will make its eagerly-awaited debut at Silverstone and will measure itself against the front-runners in the category like Greaves Motorsport, Jota Sport, Thiriet by TDS Racing, Newblood by Morand Racing, etc, plus the reigning champion Signatech Alpine with their A450-Nissan driven by Chatin-Panciatici-Webb in England. Four different makes will do battle: four Morgans, three Oreca 03s, three Zytek Z11SNs and an Alpine A450.

Thirteen GTEs will go head-to-head at Silverstone in a category in which last year’s winner won’t be defending its title as RAM Racing has moved up to the FIA WEC. The main attraction will be the Sofrev-ASP Team’s Ferrari 458 Italia with Fabien Barthez at the wheel. The GTC category has attracted no fewer than 15 entries although these cars are not eligible for the Le Mans 24 Hours. The 2013 champion, Russian squad SMP Racing (also entered in the FIA WEC in LM P2) will run two cars.

After months of preparation these two races will give fans an early glimpse of the strength of the different contenders with only eight weeks to go to the 82nd Le Mans 24 Hours.

No Le Mans for Vanthoor

The Championship battles are raging in the European Le Mans Series