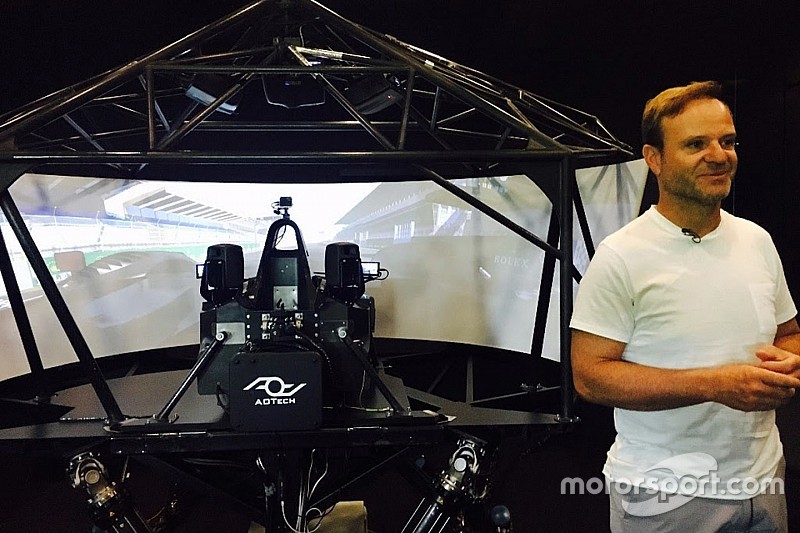 Today Friday 2nd June former F1 driver Rubens Barrichello discovered the 13.6-km Sarthe circuit during a training session on the AOTech simulator as required by the Le Mans 24-Hours sporting regulations in view of his first outing in the Le Mans 24 Hours on 17-18 June.

Any driver who has never raced in the Le Mans 24 Hours or who hasn’t taken part in the event in the last five years (all the races since 2012), is classed in the Bronze category or who did not compete in the 2016 race has to spend a day on the simulator to learn the specific characteristics of the Le Mans 24-Hours circuit.

The 24 Hours are always in the radar of any racing driver, I am really happy to be here and I think we can do fine.

This simulator session is obligatory no matter what the results of the driver in question. Thus even though Barrichello holds two records in Formula 1: starts in 322 Grands Prix between 1993 and 2011, and the fastest pole position ever achieved at an average speed of 260 km/h at Monza in 2004, he had to undergo this test to take part in the Le Mans 24 Hours.

He jokes about his rookie status with good humour: " If I am doing something new, I am rookie, and it makes me younger… (laughs) ".

The Brazilian had to take in the layout as well as the day and night-time racing conditions, traffic management between prototypes and GTs, the location of the marshals posts and the safety procedures: safety car interventions and Slow Zones, the partial neutralisation of sectors of the 24-Hours circuit in which the drivers have to maintain a reduced speed following a race incident. He also discovered a few random incidents like unexpected changes in grip, because the length of the circuit means that drivers may have to race on a track that can be both wet and dry due to localised showers in a sector.

After a first test session, the pilot expressed what he felt on the eve of Test Day : " I can have an idea of the track and also the traffic, the flags, the Slow Zones and so on. Night driving calls a bit of attention, and the Slow Zones are very useful because you don't lose three minutes in a complete lap. There are some points I got right, others I got wrong but it is better I do that in the simulator than on the real track. For me it is a good thing that my simulator session takes place in the same week as the Test Day. At the simulator, the guys are really well prepared to give you the right piece of advice, so I can play by the rules in race."

As for his ambitions regarding the race, he added:" The 24 Hours are always in the radar of any racing driver, I am really happy to be here and I think we can do fine.”

After each day’s training AOTech sends a report on each driver to the ACO. These enable the sporting management to keep a close eye on the evolution of the drivers in question during the test day.

Rubens Barrichello was the last of the 2017 drivers to take the simulator test at AOTech. After the session in the Parisian region he will head for the 24-Hours circuit for the test day on Sunday 4th June. He will drive the no. 29 Dallara-Gibson entered by the Racing Team Nederland in the LM P2 category. He will share the car with two Dutchmen Jan Lammers (who also had to take the simulator test earlier in the season as he had not raced in the Le Mans 24 Hours since 2011) with 22 starts in the Le Mans 24 Hours including victory in the Sarthe in 1988 in a Jaguar, and Frits Van Eerd.

Corvette Racing at Le Mans: All about preparation