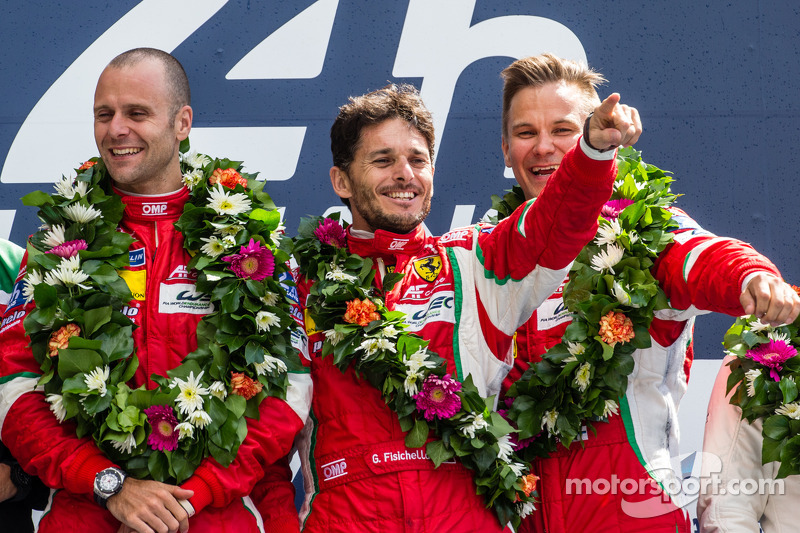 Le Mans, 15 June – Yesterday, Scuderia Ferrari’s Fernando Alonso waved off the field for the start of the race and his presence seems to have brought Ferrari some good luck. The number 51 458 Italia GT2 won the LMGTE Pro category in the Le Mans 24 Hours, so that the Italian national anthem was played again in France.

Italy’s Gimmi Bruni and Giancarlo Fisichella, along with the Finn Toni Vilander, driving for the Amato Ferrari-run AF Corse team, repeated their 2012 achievement, outclassing the opposition despite a few difficult moments.

This was Ferraris 24th class win, to go with nine outright victories. Having started from pole in the class, Bruni dominated the early hours, but then, in wet conditions when two downpours hit the Sarthe circuit, the car struggled and had to give best to Chevrolet and Porsche. The Ferrari men didn’t lose heart and once the track dried out, began an amazing climb up the order. 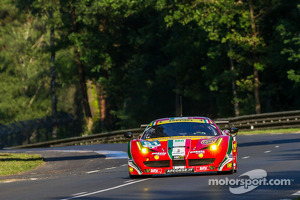 The Ferrari 458 beat off prestigious names such as Chevrolet, Aston Martin and Porsche, companies that are also rivals in the marketplace. The win owed a lot to the quality of the drivers but also to the exceptional reliability of the cars. The winning car had not the slightest problem. In second place, but almost two laps down, was the number 73 Chevrolet of Garcia-Magnussen-Taylor, with third, almost three laps down going to the Porsche of Holzer-Makowiecki-Lietz.

Ferrari President Luca di Montezemolo was very pleased. “This is a very important victory in an amazing race,” he said. “This result is extremely satisfying and is a just reward for all the hard work from everyone in the team and my congratulations go to them. We dominated the race with a car that was able to outclass some very strong opponents and everyone at Ferrari can be very proud of that.” The Maranello marque and AF Corse also finished on the podium in the LMGTE Am class. In car 61, Italians Marco Cioci and Mirko Venturi and the Argentinian Luis Perez-Companc, finished third, behind the winning 95 Aston Martin of Danes Kristian Poulsen, Nicki Thiim and David Hansson and the 88 Porsche of Ried-Bachler-Al Qubaisi.

Signatech-Alpine on the podium of an epic edition!