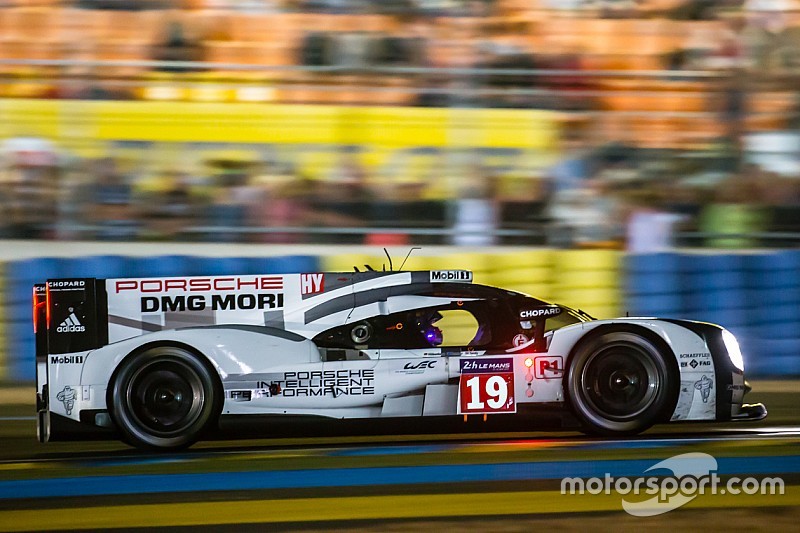 The No.19 Porsche 919 of Nico Hulkenberg, Nick Tandy and Earl Bamber leads the 83rd Le Mans 24 Hours at its halfway point, heading the No.9 Audi of Felipe Albuquerque, Rene Rast and Marco Bonanomi.

As the French sportscar classic entered its second half, the battle for overall honours is as close as ever with the top three running rarely more than half a minute apart.

Hulkenberg handed over to Tandy just after midnight and the British driver continuing to lap with increasing confidence and pace.

The British LMP1 rookie jousted with Andre Lotterer and Bonanomi in the No.7 and No.9 Audi R-18 e-tron quattros respectively before pulling away impressively.

The fighting between the three was given yet another twist when Tsugio Matsuda’s Nissan ground to a halt at Mulsanne Corner 00.45. The subsequent slow zone saw Tandy initially aided by the temporary neutralization, but Lotterer and Bonanomi were still within striking distance.

Ultimately Tandy’s pace and traffic management slowly opened more of a gap and by 03.00am – half distance – he enjoyed just over a minute’s lead to the No.9 Audi of Bonanomi. Lotterer was just three seconds further back from his Italian stablemate in the No.8 car.

Timo Bernhard held a watching brief in fourth position in the No.17 Porsche 919 Hybrid. The 2010 Le Mans winner was endeavouring to claw back the time lost after Mark Webber’s one minute stop-go penalty for overtaking under yellow flags earlier.

Loic Duval was back in the No.8 Audi for the first time since his early-evening accident at Indianapolis. The Frenchman was in a fifth place but on the same lap as the No.17 Porsche.

The delayed No.18 Porsche 919 Hybrid lost more time when Neel Jani suffered a carbon copy of Romain Dumas’s earlier excursion at Mulsanne Corner. The Swiss seemingly locking his brakes and skating across the gravel to lightly hit the tyre barrier.

He was winched clear of the gravel under a Slow Zone and lost almost another lap to the leading pack.

KCMG extended its LMP2 lead with Nicolas Lapierre setting a succession of quickest laps to open up the gap to over three minutes. The former Toyota works LMP1 driver set the fastest lap of the class with a 3m37.522s effort, but the gap narrowed when the pitstops got married up just before 3am when the gap stood at just under one minute.

Thiriet by TDS could only hold a watching brief in its ORECA 05-Nissan. Ludovic Badey took his second go at the wheel but was unable to resist the narrowing the buffer between him and Sam Bird, who continued to chip away at the gap in his G-Drive Ligier-Nissan.

JOTA Sport continued a strong fightback from first-hour sensor problems with the Gibson 015S Nissan. A rapid stint from Mitch Evans moved the car in to seventh place as last years LMP2 winners set about attacking the Murphy, Morand and No.28 G-Drive entries which ran ahead of it in fourth, fifth and sixth positions.

The No.30 ESM Ligier-HPD driven by Jon Fogarty had a spectacular accident at the Porsche Curves 01.30am. The American rattled off the wall, damaging front and rear sections of the LMP2 coupe, but the team performed wonders in getting Fogarty back out after only losing a single position.

There was disappointment for the troubled Team SARD Morand team as its Morgan-Evo SARD retired at 02.35 as Pierre Ragues pulled off the track with a smokey engine bay area.

Oliver Gavin completed a mighty early morning series of stints to open a gap on the Aston before handing back over to Tommy Milner.

The winners of the last WEC round at Spa – No.99 Aston with Fernando Rees taking over from Richie Stanaway – continued to push and they led at the 03.00 stage despite a brief off-track excursion.

The No.91 Manthey Porsche was still in touch with the front two and occasionally split the pair between pitstops. Michael Christensen took the car in to the early hours before Jorg Bergmeister took over and attempted to reduce the gap.

The lanky German also had to keep an eye on his mirrors too as the reigning champions in the No.51 AF Corse Ferrari 458 Italia was right on his tail.

Mathias Lauda took over the cockpit from Dalla Lana just before the halfway mark came around.

The Dempsey Proton Porsche 911 RSR moved up in to third place in class with Pat Long and then Marco Seefried capitalising on problems for the No.83 AF Corse, which lost time with a front suspension breakage.