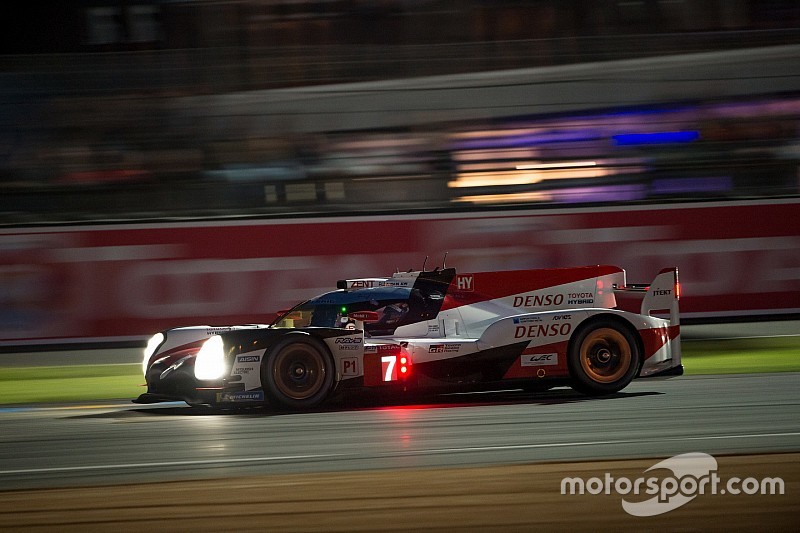 Toyota stretched its advantage over its LMP1 privateer rivals to two laps at one-third distance in the Le Mans 24 Hours, as Kamui Kobayashi established a small lead in the #7 car.

After passing teammate Kazuki Nakajima in the seventh hour, Kobayashi had stretched out a gap of a little more than 10 seconds before Nakajima pitted the #8 Toyota to hand back to Sebastien Buemi.

A safety car at the start the fifth hour for a major crash involving the ByKolles machine of Dominik Kraihamer at the Porsche Curves reset the fight between the two Toyotas, with Fernando Alonso passing Jose Maria Lopez before handing over to Nakajima.

The two Toyota drivers are now two laps clear of the best non-hybrid runner, the #3 Rebellion R-13 of Thomas Laurent, which took the place when the #17 SMP BR1 of Matevos Isaakyan spun into the barriers at the Porsche Curves just shy of the eight-hour mark.

Rebellion's second entry, the #1, has dropped another lap off the lead after a visit to the garage but holds fifth place, ahead of the best of the LMP2s.

The DragonSpeed BR1 that held has dropped well down the order after an off for Renger van der Zande at the Dunlop chicane forced a lengthy stop for repairs, promoting the best of the Manor Ginetta G60-LT-P1s to that position in the LMP1 class - albeit 10 laps off the lead.

SMP's second BR1, the #11 car, circulates 49 laps down after its engine problems, with Jenson Button completing his first stint before handing over to Mikhail Aleshin.

G-Drive Racing continues to dominate in LMP2, with Jean-Eric Vergne holding a lead of 2m15s in the #26 Oreca over nearest rival, the #36 Signatech Alpine car.

Pierre Thiriet suffered a spin in the #36 exiting Arnage at the end of the sixth hour before handing back to Andre Negrao, who in turn is 43s clear of Will Stevens in the #23 Panis-Barthez Ligier.

The IDEC Sport Oreca has also clawed its way back into podium contention, another 20s back.

Juan Pablo Montoya dropped the #32 United Autosports Ligier a further lap back after an off at Indianapolis, dropping the car now being driven by Hugo de Sadeleer to 11th in class.

Porsche continues to lead the GTE Pro category with the #92 'Pink Pig' car, which holds a massive 2m20s advantage after a storming stint from Michael Christensen.

The Dane handed over to Laurens Vanthoor towards the end of the eighth hour, while the #91 and #93 Porsches - being driven by Frederic Makowiecki and Nick Tandy respectively - both passed the #81 BMW M8 in the seventh hour to give Porsche a 1-2-3.

Leading the Ford charge is Sebastien Bourdais in fifth in the #68 machine, followed by Pipo Derani in the best of the AF Corse Ferraris. The second BMW, the #82, had been battling in that group too until it had to head to the garage to replace a front-right damper.

Corvette's top runner ran eighth, while the best of the Aston Martins was a lapped 11th.

Dempsey-Proton leads the way in GTE Am with Julien Andlauer holding an advantage of some 25 seconds in the #77 Porsche over Jeff Segal in the JMW Ferrari.

Matteo Cairoli runs third in the second Proton Porsche, the #88 car, around the same distance back.

Aston Martin’s hopes of class victory look to be over after Paul Dalla Lana made a head-on impact with the tyre barriers on the entry to the Porsche Curves in the seventh hour.

Montoya beats himself up over Le Mans shunt