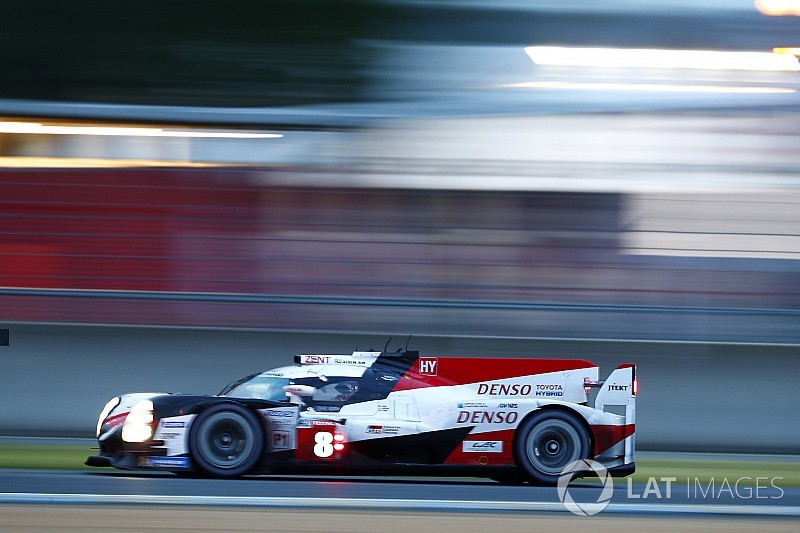 Brilliant drives by Fernando Alonso and Kazuki Nakajima sent the #8 Toyota past its sister #7 car to give Sebastien Buemi the lead of the Le Mans 24 Hours at two-thirds distance.

At the race’s halfway point, Jose Maria Lopez in the #7 Toyota held a 75-second lead over teammate Fernando Alonso, who was cutting that lead almost every lap.

Within 40mins, the gap was well under 60sec and the two-time Formula 1 champion radioed to the team, “Tell me if you want another stint, eh? I’ve got into the rhythm of the night”.

However, a slow zone caused by an LMP2 shunt prompted the Toyota team to pit the #8 and slot Nakajima in. The pole-winner carried on Alonso’s fine work, slashing away at his deficit.

By the time he stopped for the first time in a triple stint, Nakajima was only 5sec behind. Kobayashi took over from Lopez and the hemorrhaging ceased – Nakajima was complaining about the brakes on the #8 car.

Yet after his next stop, he started catching back up. With 8h35min remaining, Nakajima swept down the inside of Kobayashi at Arnage to take the #8 Toyota into the lead, and immediately pulled away.

That progress was almost immediately halted by slow zones for Giorgio Sernagiotto stuffing his Villorba Corse LMP2 entry into the gravel at Indianapolis and Alexander Sims backing the MTEK BMW M8 into a wall at Porsche Curves.

Nakajima having done his job to perfection, he pitted and handed over to Buemi, who pulled a 34s lead after Kobayashi pitted the #7 car.

Rebellion Racing’s #3 car had to have a long stop in the hands of Gustavo Menezes and fell to fourth behind teammate Bruno Senna, but then it was the #1 car’s turn to stop for a full service in the garage and Thomas Laurent pushed the #3 ahead of the #1, now driven by Neel Jani.

However, the pair are 10 laps behind the Toyotas.

The #10 DragonSpeed BR1 that lost 49 minutes due to alternator and floor problems was next up in LMP1, but followed 23 laps down in 18th place overall.

In LMP2, Jean-Eric Vergne in the G-Drive Oreca led Timothe Buret’s Panis-Barthez Ligier by one lap at half distance, but the Signatech Alpine of Nicolas Lapierre passed Buret to move into second half an hour later.

In the hands of former Manor F1 driver Will Stevens, the Ligier then repassed the Alpine piloted by Andre Negrao and pulled away, before Julien Canal took over from Stevens, and Lapierre retook the seat of the Alpine. They currently run 1m40s apart.

While G-Drive looks very secure in the lead, it hasn’t been all good news for the squad: Jose Gutierrez spun the team’s #40 car into the wall at the Porsche Curves, ending that car’s race on the spot.

In GTE Pro, the ‘Pink Pig’ works Porsche 911 RSR of Michael Christensen ran 1m56s ahead of Gianmaria Bruni in the sister car, the ‘Rothmans’ 911, as the race passed the 12-hour mark. Four hours later, this advantage had been eked out to 2min27sec, and it was Kevin Estre and Richard Lietz at the wheel.

Sebastien Bourdais took over the #68 Ganassi Ford GT from Dirk Muller and put in a long and near-perfect stint to run third, around 3mins off the lead before relinquishing his seat to Joey Hand who is 23sec behind Lietz.

Behind them run Tony Kanaan in the #67 Ford, Antonio Giovinazzi in the AF Corse Ferrari 488, Scott Dixon (#69 Ford) and Mike Rockenfeller in the #63 Corvette.

Sims’ shunt in the M8 was terminal.

Matt Campbell continues to lead GTE Am for Dempsey-Proton Racing in the Porsche 911, and he was being chased by three Ferrari 488s – Spirit of Race, Keating Motorsports, and JMW Motorsport.

However, Jeff Segal then spun the JMW Ferrari off, allowing the second Dempsey-Proton Porsche, currently driven by Matteo Cairoli, into the top four, just ahead of Pat Long’s Proton Competition 911.

Keating has now moved his Ferrari into second, ahead of Francesco Castellacci in the SoR machine.

Alonso: “Part of the job is done” after epic recovery drive