A mock-up of next year's Honda engine for the new LMP1 category -- a 2.6-liter V-6 twin turbo -- was on display in front of the pits of Highcroft Racing during the first two days of practice and qualifying at Le Mans. Not only is the mock-up an ...

A mock-up of next year's Honda engine for the new LMP1 category -- a 2.6-liter V-6 twin turbo -- was on display in front of the pits of Highcroft Racing during the first two days of practice and qualifying at Le Mans. Not only is the mock-up an advertisement for privateers who may want to lease the engine next year to compete in the LMP1 category, it's also a confirmation that HPD and Honda will participate at Le Mans in the LMP1 category in the future. 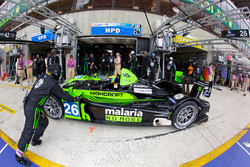 Based on a production engine, the twin turbo will be leased by HPD to customer teams like Strakka Racing and presumably will power Highcroft, HPD's official factory entrant. "My plan is to come back next year in LMP1 and to come back every year," said Duncan Dayton, Highcroft's principal.

Not related to the V-6 turbo to be used under the new IndyCar formula, the new LMP1 engine is considerably shorter than the current 3.4-liter normally aspirated V-8 used in the LMP2 entries of Highcroft and Strakka. From Dayton's point of view, the V-6 leaves enough room to mount a flywheel as part of a hybrid system. "That's what I've suggested to HPD," said Dayton, "not that they listen to me."

Corvette Racing celebrated the 50th anniversary of the class victory of a Briggs Cunningham-entered Corvette at Le Mans along with one of the drivers -- 92-year-old John Fitch. A fighter pilot who was shot down during World War II, Fitch raced sports cars throughout Europe, South America and the U.S., scoring a victory at Sebring and a class victory at the Mille Miglia. He drove a Corvette to the large displacement GT class victory at Le Mans in 1960, when the circuit was almost entirely public roads, co-driving with Bob Grossman.

Two drivers were the standard when Fitch, who also drove Cunningham C-2, C4R and C5R entries, started competing at Le Mans in 1951. "When you look at the Corvettes that raced at Le Mans 50 years ago, it's impossible not to be impressed by the passion, the immense courage, and the physical stamina that was required to race for 24 hours in those vehicles," said Corvette Racing program manager Doug Fehan. "We will always work in the shadow of these racers."

Current C6.R driver Johnny O'Connell was suitably impressed. "I just hope that in 50 years I can be here at Le Mans and people will ask me, 'How did you ever do it with three drivers?'" said O'Connell.

Fitch graciously acknowledged having a good time at Le Mans as a guest of Corvette. "I pay attention to what young people are doing and thinking," said Fitch, a civil engineer who invented Fitch Barriers for highways and helped found the Lime Rock Park circuit in Connecticut. "So often young people don't know history. But this group knows history!"

The restored No. 3 Corvette driven by Fitch and Grossman, liveried in traditional American white and blue racing colors, is scheduled to participate in the annual parade on Friday that features all of the current drivers.

Don Panoz anticipates that his new Abruzzi "Spirit of Le Mans" will start the 2011 edition of the 24 Hours of Le Mans from London. One of the team's drivers will pilot the street-legal Abruzzi with its built-in roll cage to the circuit before its entry into the GT Endurance class, now known as GT2.

"If you look at the photos of the old Le Mans start," said Panoz, "some of the cars have only a number plate on them and nothing else, no sponsorship. Some of the cars were driven to the track and the only thing they did was put the number on."

"On our car you only need to change the tires," continued Panoz. "You'll need a stiffer spring and probably need to put in different shocks. You take the seats out, put in a racing seat and a fire bottle."

The object is for the Abruzzi to hold its own against world class competition. John A. Leverett, sales director at Panoz Auto Development, anticipates that buyers of the Abruzzi, limited to 81 cars produced, are as likely to be collectors as much as racing enthusiasts.

Never shy with an opinion, Panoz believes the Le Mans organizers at the ACO should have only one Endurance Cup race each year and invite the top finishers from each of the Le Mans series around the world. "You would have one race at the end of the year and alternate it between the different continents," said Panoz. ...One of Panoz's ideas was to hold testing at Le Mans two weeks prior to the 24 Hours. But after two years of no testing due to the economy, next year the ACO will return to hosting a test day in either late April or early May to help teams adjust to the new rules for 2011. The 24-hour will be held June 11-12.

Vanina Ickx rates her chances well at this year's 24-hour. Her No. 008 Lola Aston Martin team "is the first time I've felt at home at Le Mans," said Ickx, who raced the Signature Plus prototype in the LMS events at Le Castellet and Spa earlier this year with co-drivers Pierre Ragues and Franck Mailleux. "I don't have the stress of a last-minute deal, racing around and getting things together."

The Belgian says her style suits driving in the rain, but the Aston Martin does not. "This is a car you drive with the steering, the throttle and the brakes," she said. "You have to play with all three. You must have this correct because if not the back of the car tends to come around."

In five previous appearances, Ickx has a career-best 11th place in the Pescarolo-Judd in 2008 with Stephan Gregoire and Joao Barbosa. The daughter of six-time Le Mans winner Jacky Ickx considers one of her challenges to be establishing a new high-water mark for female drivers. Odette Siko finished fourth at the Sarthe in 1932 as well as seventh in 1930 and Annie-Charlotte Verney finished sixth in 1981. Other top tens were scored by Desire Wilson (seventh in 1983) and Maguerite Mareuse (seventh in 1930).

Former F1 champion Nigel Mansell's entry alongside sons Leo (age 25) and Greg (age 22) has caused more commotion than any of the other star power appearances by former F1 drivers, including Jean Alesi, who is driving an AF Corse SRL Ferrari, and four-time F1 champion Alain Prost, on hand to support his son Nicolas Prost's entry at Rebellion Racing.

Of the three Mansell's, "Our Nige" had the wildest ride on Wednesday, spinning and finding a gravel trap briefly before continuing in the Beechdean-Mansell Ginetta-Zytek 09S.

Mario Andretti, who came to his grandson Marco Andretti's test with Rebellion at the Le Castellet circuit, attended the Canadian Grand Prix in Montreal this weekend.