Following a triumphant season in global sports car competition, which included five wins, countless podium finishes and the American Le Mans Series LMP2 championship, Level 5 Motorsports and Scott Tucker have been recognized for their achievements with an automatic invitation to next year’s 24 Hours of Le Mans.

The entry, awarded by the Automobile Club de l’Ouest, organizers of the legendary 24-hour French endurance race, was earned thanks to Level 5’s LMP2 win in the 14th annual Petit Le Mans, where Tucker and co-drivers Christophe Bouchut and Joao Barbosa drove their No. 33 HPD ARX-01g to an impressive sixth-place overall finish.

Victory at Petit Le Mans capped off an incredible season for the globe-trotting team, which took part in both the American Le Mans Series and Intercontinental Le Mans Cup in 2011. In addition to his win at Road Atlanta, five-time national driving champion Tucker recorded victories in the ALMS races at Sebring, Long Beach, Road America and Laguna Seca.

We’re going to plan and work very efficiently to represent USA in the best possible light on the world’s stage...

But, it was Level 5’s first trip to Le Mans that stood out as their highlight of the year. In a grueling race of attrition, stacked up against the toughest competition in the world, Tucker, Bouchut and Barbosa scored a remarkable podium finish in the team’s debut. Level 5 was also the highest-placed U.S. team, with Tucker also taking honors as the top American driver in the race.

The third place result for Level 5, the only prototype team flying the Stars and Stripes at Le Mans this year, combined with the automatic invite earned from their Petit Le Mans victory, gave Tucker no other reason but to already confirm his team’s presence on the 2012 grid in the world’s most prestigious endurance race.

“We’re very proud of our past accomplishments and championships,” said Tucker. “Getting an invitation to Le Mans is something we have worked very hard for and we’re honored and humbled at the same time in receiving it. We’re going to plan and work very efficiently to represent USA in the best possible light on the world’s stage and are proud for being one of the few American teams that competes in the highest level of sports car racing in the world.”

Level 5 is only one of four LMP2 teams to have already received an entry to Le Mans. A general selection process is planned for early February that will fill the remaining space in the 56-car starting field. The 80th annual 24 Hours of Le Mans is set for June 16-17, 2012. Prior to that, teams will have two days of practice and qualifying to prepare for the big race, as well as an official Test Day, scheduled for June 3.

“Level 5 has proven to have the performance and presentation that corresponds with the look and feel of a world-class event like the 24 Hours of Le Mans,” said team manager David Stone. “We’re proud to have earned an invite and are looking forward to returning next year, with the target of winning LMP2. 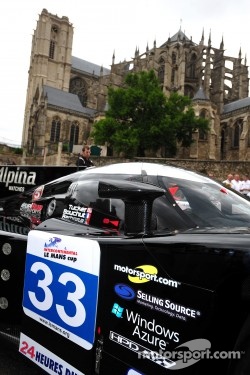 “Finishing on the podium this year in Level 5’s debut was certainly a driving and motivating factor to keep searching for the dream of standing on the top step. Having won Petit Le Mans two years in a row, and this year in LMP2, in a race with good, hard-fought competition, we feel fortunate that it had led us to the earned right to be in the big show again.”

With a switch to the new HPD ARX-03b for next year, Level 5 plans to begin an aggressive testing and development program in February, ahead of the 60th Mobil 1 Twelve Hours of Sebring, which will serve as the opening round for the American Le Mans Series presented by Tequila Patrón and the new FIA World Endurance Championship. Further details of Level 5’s complete 2012 program will be announced at a later date.