Chassis and engine orders pour in for 2012 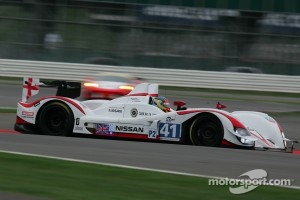 Zytek Engineering is building on its championship winning season with plans unveiled recently showing that it will be busier than ever during 2012. Greaves Motorsport has shown faith in the chassis that took it to an LMP2 class victory in the Le Mans 24 Hours by announcing that it will run two cars, while a record number of enquiries have been received with regard to the Zytek developed and serviced Nissan LMP2 engine. In addition to this, Zytek will be supplying 33 engines for the prestigious Formula Renault 3.5 Series, underlying its undoubted status as the world’s most successful supplier of engines for one-make racing championships.

Greaves Motorsport, which also won the Le Mans Series LMP2 team and drivers’ titles this year, is doubling its number of Zytek chassis for 2012. Renate Ojjeh, whose son Karim was one of this year’s champion drivers, has purchased a new car, which the team will enter for the new World Endurance Championship. Greaves’ second car will compete in the Le Mans Series with both cars being entered for the Le Mans 24 hours. The LMP2 category will be the top class for the LMS in 2012 bringing the promise of outright wins. BBC commentator, 1990 Le Mans winner and former Grand Prix driver Martin Brundle will join his son Alex, a season regular for 2012, at Le Mans itself.

The Greaves-entered Zyteks will again be among the LMP2 cars to make use of the Nissan VK45DE engine that also won the Intercontinental Le Mans Challenge. Such has been the success of this engine (it won seven races in its debut season) that there has been an unprecedented demand for the power unit for 2012. The company will continue to develop the engine and is sure to be extremely busy keeping pace with orders.

In addition to this, Zytek will be supplying the entire grid of the Formula Renault 3.5 Series with its 530bhp ZRS03 V8, a contract that extends to 2014. The company has become pre-eminent in this field having been sole engine supplier to Formula 3000 for nine years and the A1GP series for a further three. During this time, Zytek engines have achieved an unparalleled reputation for reliability as well as performance.

“We are delighted that Greaves Motorsport will continue its winning ways with two Zytek chassis next year and we are looking forward to continuing our close and successful partnership with the team,” said Zytek Engineering Operations Director John Manchester. “This, and the demand for our engines in both the Formula Renault 3.5 Series and in LMP2 endurance racing, is fantastic news for our company and this further establishes Zytek as a world leading race car and race engine manufacturer.”