Just two weeks after the Le Mans 24 Hours, OAK Racing is preparing to return to the track for the Italian round of the Intercontinental Le Mans Cup, the Imola 6 Hours. However, unlike in previous events, the team will only be running one of its LMP1s, car #15, alongside its pair of LMP2s. The Le Mans 24 Hours was a tough event for many teams and for OAK Racing, the short timeframe between the two events has meant that car #24 hasn’t been repaired in time after the damage it suffered during a small fire at the iconic endurance race. The team has therefore reluctantly taken the decision to withdraw its entry for the forthcoming race. 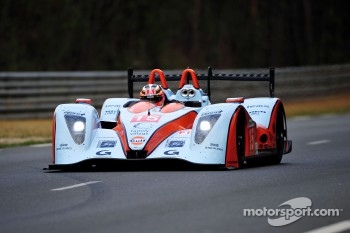 The #15 LMP1 will enter the event, which is also a round of the Le Mans Series, with Guillaume Moreau and Pierre Ragues at the wheel as Matthieu Lahaye is still recovering following his accident at Spa. The crew of car #35 will be the same as at Le Mans, Andrea Barlesi, Frédéric Da Rocha and Patrice Lafargue.

OAK Racing will also run its second #49 LMP2 car, which also did well at Le Mans. The OAK-Pescarolo prototype will again receive support from neighbours and friends DAMS and for this race will defend the famous orange-and-blue colours of Gulf Oil International. Jacques Nicolet will be the team’s non-professional driver, as stipulated by the regulations, and will share the car with Alexandre Prémat.

The 29-year-old Prémat is one of the most talented French drivers of his generation and boasts an impressive racing CV. A superb start to his career in single-seaters included wins in the Masters of Zandvoort and the Macau GP while racing in the F3 Euro Series, and he was also a winner in the first edition of A1 GP and in the GP2 Series, where his team-mate was no other than Lewis Hamilton! He graduated to the DTM and endurance racing with Audi in 2007 and, the following year, won the Le Mans Series and finished fourth at the Le Mans 24 Hours. In total he has raced four times at La Sarthe and will be a key performer for the team.

Following his recent appearance at Le Mans, the Italian race is an opportunity for Prémat to quickly get back behind the wheel of an LMP2 car.

Alexandre Prémat: “I’m delighted to join OAK Racing for the Imola 6 Hours in the #49 LMP2 car alongside Jacques Nicolet. It will be an interesting challenge because we don’t have much time or test days, so I will have to adapt to the car quickly. Nevertheless, I hope to use my experience to help develop the car at the Italian circuit, which is somewhere I have raced before. For sure the objective is to challenge the other LMP2 cars and achieve a podium finish.”

Jacques Nicolet: “Alexandre Prémat is part of a young generation of drivers I had the opportunity to meet when I first started racing in sports-prototypes. I am very pleased to be sharing the #49 car with him because, aside from his qualities as a driver, his profile and attitude are well suited to the team and he will have no problems fitting in. As a team owner, I am proud to welcome a driver with such talent.”