After Sebring, Le Castellet and Le Mans, the ORECA 03 has once again signed the pole position in the LMP2 class. Mathias Beche, driving for TDS Racing, dominated qualifying for the 6 Hours of Imola, ahead of another ORECA 03, that of Boutsen Energy Racing. The fine result is complemented by a fourth place for Signatech-Nissan, and sevent for Race Performance. Tomorrow, the prototype designed and built in Signes will hope to win its second race after victory at Spa.

After a convincing 24 Hours of Le Mans, the ORECA 03 wasted no time to shine on the Enzo et Dino Ferrari d’Imola circuit. Whether it be Boutsen Energy Racing or TDS Racing, both dominated the practice sessions, always maintaining the top position in LMP2 and even occupied third place overall at the end of the second session run under the rain. 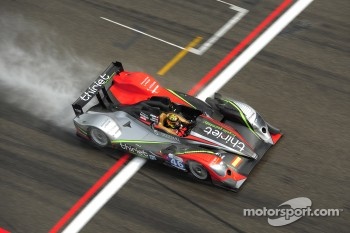 During qualifying, the ORECA 03s again proved to be strongest, with a nice battle between Mathias Beche (TDS Racing) and Dominik Kraihamer (Boutsen Energy Racing) for pole. The Swiss driver improved his time lap after lap in search of the fastest time, but despite this, Kraihamer signed the second quickest lap, only 268 thousandths of a second behind Beche. Behind this 100% ORECA 03 front row, Soheil Ayari placed the Signatech-Nissan team, current leaders in the Intercontinental Le Mans Cup, in fourth position. Race Performance will start from the fourth row, in seventh.

« I’m very happy with this pole, » said Mathias Beche. « I was able to turn laps in the dry and we took advantage of the qualifying to bring a few evolutions to the setup. I’d like to thank TDS Racing for all of their hard work. The ORECA 03 is still very easy to drive. It’s a good car that, even when we’re driving on a circuit that we are discovering for the first time, allows you to make a performance such as today. It will definitely be the hardest race in terms of traffic, not forgetting the heat here. The concentration level will have to be high and we’re looking forward to a good race tomorrow»

At the conclusion of a good battle, Elton Julian signed the pole in Formula Le Mans. At the halfway point, the top three were grouped within two-tenths before Nicolas Marroc (JMB Racing) took the advantage to take an early fastest lap. With the second place time, Elton Julian (Genoa Racing), never gave up and improved his time in the last seconds of the session to take class pole. The championship leader, Pegasus Racing qualified third, ahead of Hope Racing. Although they did well in practice, Neil Garner Motorsport did not participate in the qualifying session.

« Between the rain and the red flags, it wasn’t easy to learn the circuit. » explains Elton Julian. « It’s a nice place, with lots of history. We will try to have a good, clean race. The championship fight is a good one and the priority is to take home points. The ORECA-FLM 09 is handling well and our driving squad is doing well together including Jens (Petersen) and Christian (Zugel). »

The start of the 6 Hours of Imola will be given Sunday July 3, at noon.