The Quifel ASM Team has decided to bring its participation in the Le Mans Series 2011 championship to an end and will not be taking part in the final two scheduled races following an in-depth analysis of the team’s performances in the first stage of the season in the LMP1 class. These performances were entirely out of line with the team's prestige and achievements in recent seasons, particularly the title it won in the LMP2 category in the 2009 championship.

After dropping out of the race, due to a breakdown in the Zytek engine, in the recent Le Mans 24 Hour race and an absence from the Imola race, in Italy, the Quifel ASM Team decided it did not have the essential conditions required to take an honourable part in the races at Silverstone and Estoril, in September, and has sadly already informed all its sponsors and partners of its decision.

Although the future of the Quifel ASM Team in the 2012 season has not entirely been decided, everything is working towards the possibility of an attractive and competitive project that will make best use of the vast know how the team has gained over the last few seasons. 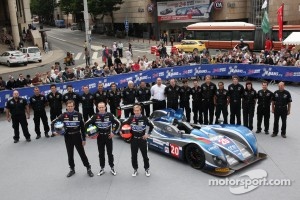 The Quifel ASM Team would like to offer thanks to all their sponsors for the trust placed in the team, the efforts of its partners, notably Dunlop, and the enthusiastic support of the many fans of the only Portuguese team that takes part in one of the classes of such a high level, worldwide championship.

Kimi Räikkönen enjoyed his test in the Peugeot 908