LE MANS, FRANCE - The No. 71 AF Corse Ferrari 458 driven by Michael Waltrip, Rob Kauffman and Rui Aguas retired due to transmission failure after racing about 16 hours in the 79th annual running of the 24 Hours of Le Mans. 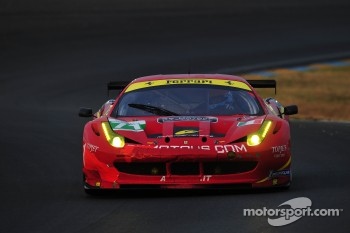 The team placed 13th in the GTE Pro class and 38th overall. Only 28 of the 56-car field finished the endurance race on the historic eight-mile track.

Despite the early exit, Waltrip and Kauffman are enthusiastic about a potential return to Le Mans.

"We had a blast and we hope to return in the future," said Kauffman. "It was a privilege to participate in the Le Mans 24 Hours."

Waltrip said the week-long events culminating with the race will be one of the highlights of his career:

“I’m a NASCAR guy and will always be a NASCAR guy. But, this was pretty cool. It’s been a wild week. It started with rushing out of the television booth at the Kansas truck race and taking planes, trains and automobiles to get here in time for scrutineering the next day. The events in Le Mans during the week were awesome and you could really start to feel the intensity build as the race drew closer.

“It was amazing to watch the battle between Peugeot and Audi. This is what those guys live for and they take it seriously. Once the race started the track was awesome. I love the manufacturer involvement, the layout, the fans, the flags. It was just a spectacle. I see why this is one of the world’s great events. We weren’t very fortunate in the race, but our AF Corse team car finished second so that was really cool. We learned a lot with this new car and I really look forward to what the future holds for us in sports car racing. I’m ready to go home and get back to the NASCAR garage at Michigan.”