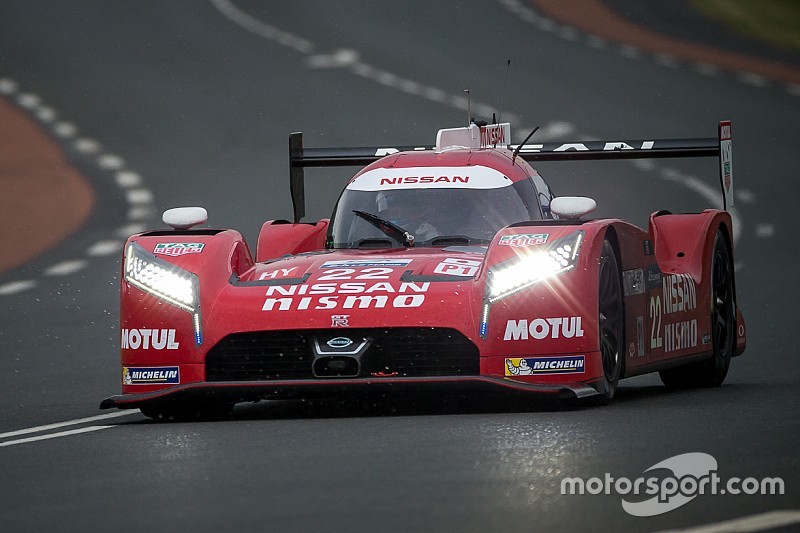 Le Mans, France – Nissan’s much-anticipated Le Mans challenger, the Nissan GT-R LM NISMO, made its race debut at the Le Mans 24 Hours this weekend. Such is the scale of the challenge to enter the top endurance class, Nissan set a target of getting one of it’s three cars to the finish of the 24-hour race.

The #22 Nissan GT-R LM NISMO of Harry Tincknell (GB), Michael Krumm (GER) and Alex Buncombe (GB) took the chequered flag at 15:00hrs on Sunday afternoon after battling against the odds to complete the greatest race in the world.

We ran the entire race making sure we were mechanically sympathetic so we could rack up the miles and finish Le Mans,

For the first ten hours of the race the three GT-R LM NISMOs racked up the miles, all completing over 100 laps of the 13.629km Le Mans circuit in that time. The race was certainly not without drama for the #22 car, which had to contend with regular teething problems but also being hit by debris. The biggest ‘moment’ for that car came just nine hours into the race when Tincknell ran into a large piece of debris whilst hurtling towards Indianapolis Corner at 340kph.

“We ran the entire race making sure we were mechanically sympathetic so we could rack up the miles and finish Le Mans,” said Tincknell. “I certainly didn’t expect to hit a massive lump of ‘something’ that was right in the middle of the racing line. The car was feeling good at that time too so it was a real shame to have to come in with damage and lose a chunk of time. We had struggled a bit in the early part of the race but I managed to immediately pick off seven or eight P2 cars and then concentrated on bringing the car home in one piece.”

The Le Mans 24 Hours is a huge challenge for any manufacturer but to make your race debut at Le Mans requires Herculean effort. The Nissan NISMO team has worked non-stop since the GT-R LM NISMO first took to the track at the end of 2014. The car is still in the infancy stage of its development but a huge number of lessons were learnt this weekend as the team fought to keep the cars on the track.

The first casualty came close to the 10-hour mark when the #21 Nissan lost a wheel and despite the efforts of Tsugio Matsuda (JAP) was unable to return to the pits. Matsuda’s team-mate Lucas Ordonez (ESP) started the race in #21 before handing the car over to Mark Shulzhitskiy (RUS), before the Japanese driver jumped in.

“It has been a tough Le Mans 24 Hours for us but we expected that,” said Ordonez. “The start of the race went well. We had good, clean stints initially but then when we got into the night we were having some issues and then Tsugio (Matsuda) had a problem with one of the wheels and he couldn’t make it back to the pits. Losing a front wheel when you have a front wheel drive car is not ideal. It was unfortunate but I have to thank the team, they made a superhuman effort over the last weeks and months and it’s devastating for them to have their car not return to the pits. We have learnt so much this weekend. We have gathered so much data but we have learned how to work together as a race team. We now need to keep on learning, improving and developing for the future.

The most painful exit

The #23 Nissan had perhaps the most painful exit from the race, retiring with a suspension issue. Jann Mardenborough (GB) and his team-mates Max Chilton (GB) and Olivier Pla (FRA) were delayed by a clutch issue at the start but they got stuck into the race and were looking good for a finish when Mardenborough was forced to pull off the circuit with just one hour of the race remaining.

“Missing the start meant that I missed out on any danger,” said Mardenborough. “I had a really good opening run, triple stinting the tyres and just concentrated on keeping the car on the track. I was gutted to have to retire the car with just an hour to go. I tried everything I could to get going again but #23 had had enough. We ended the race with a car that was much better to drive than at the start as we continued making progress as we went through the race. Thanks to the crew who have worked so hard, particularly these past few weeks. We did something to be proud of today.”

“I am feeling very proud of the whole team right now,” said Nissan’s Darren Cox. “For sure we have had problems but that’s what happens when you innovate. Our engine is strong and we were able to quickly fix the other problems that we had. We have learnt an incredible amount at Le Mans and our battles will only make us stronger.

“Most LM P1 manufacturers don’t finish Le Mans at their first attempt so it was important for us to hit this target,” he continued. “The guys in the garage are the heroes this weekend and the drivers have all done an incredible job, sometimes in very difficult circumstances. They needed physical and mental strength in equal measure this weekend and every one of the nine delivered for us. We have done exactly what we needed to do. We dug in, we solved our problems, we exploited the limits of our current performance and we finished the Le Mans 24 Hours.”

In the LM P2 field

In addition to its fledgling LM P1 programme, Nissan provides engines to many of the LM P2 teams at Le Mans. Those teams did the Japanese manufacturer proud at Le Mans by taking the top seven finishing positions in the LM P2 class. The #47 KCMG Oreca-Nissan took the win, followed by last year’s winner the JOTA Sport Gibson-Nissan, with the #26 G-Drive Ligier-Nissan taking the last podium place. Gaetan Paletou, Nissan’s newest Lounge to Le Mans racer, unfortunately didn’t get to race as his car retired before it was his turn to drive.

The next race for the Nissan GT-R LM NISMO is the 6 Hours of Nürburgring, round four of the FIA World Endurance Championship, which will be held on 30 August.