Mixed fortunes for Ferrari at the Le Mans 24 Hours 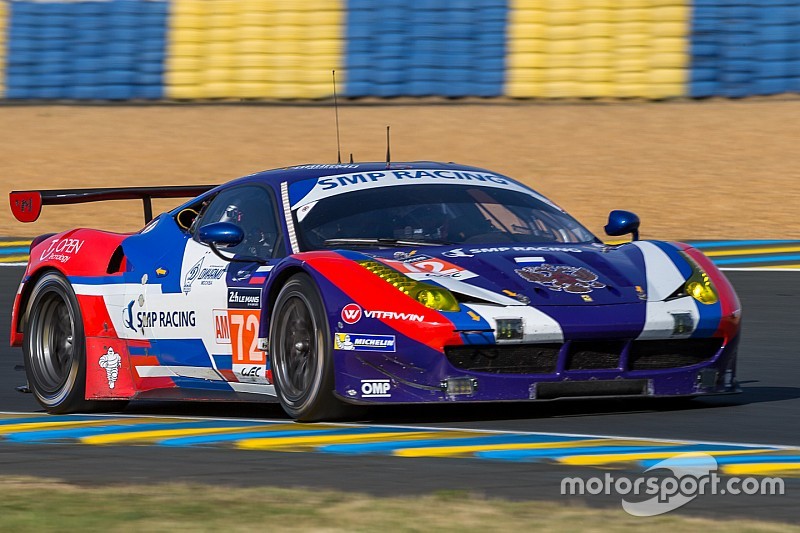 Le Mans – This is the final result for Ferrari's drivers and teams at the 83rd edition of the Le Mans 24 Hours race: the joy of Andrea Bertolini, test driver for Ferrari and one of the strongest Italian Endurance drivers of all time, his two Russian team-mates, Aleksey Basov and Victor Shaytar, and the SMP Racing team, which, after winning the European Le Mans Series championship in 2014 succeeded, in the GTE-Am category, winning the most important race in the world.

However, the joy of the Sassuolo driver isn't enough to temper the bitterness of knowing that the potential for bringing home a victory in the GTE-Pro category was there. The 2014 winners, “Gimmi” Bruni, Toni Vilander, and Giancarlo Fisichella, threw themselves in like lions, succeeding, through various tactics, in recovering a race that seemed over, and which, in the end, was lost due only to a technical failure.

... this is the first time that a Russian team wins the 24 Hours.

At 3pm yesterday, the battle in the GTE-Pro class kicked off and was immediately wide open, with Ferrari number 51 of the AF Corse team, in the hands of Bruni, attacking polesitter Aston Martin no. 97. The following four hours saw Ferrari experience difficult moments: number 51, driven by Fisichella, was struck by Audi prototype no. 8 at the restart after a yellow flag. The Italia 458 experienced a rear right tyre puncture and damage to its side, which caused it to lose precious minutes. At the same time, number 71 lost three laps due to the substitution of its starter.

Halfway through the race both Italia 458s were, therefore, quite far from their objective. 51 was in fifth, almost a lap behind the leader Aston Martin 99, while 71 was four laps down and very far from the podium. However neither of the two teams gave up hope. Using the issues experienced by Aston Martin (an accident for 99 and a malfunction for 97) and Porsche 91 to its advantage, number 51, thanks to an incredibly rapid stint by all of its drivers, managed overnight to put itself back in the running for victory together with Milner-Taylor-Gavin's Chevrolet number 64.

At dawn Vilander also skilfully took advantage of a yellow flag to change not only his tires, but also his brake pads, thus saving himself approximately 2/3 of a lap as compared to his rivals and re-entering the track ahead. Unfortunately, right after the Safety Car restart, he found himself with a punctured tyre and the strategy in vain. Forced to make another pit stop together with Corvette, he found himself racing against the American car in the pit lane and having to grant him the lead. At the next pit stop the American car changed its tyres while Bruni did not and instead took the lead, to the point that he passed the baton on to Vilander in first place.

In Toni's first lap, however, there was a problem with the gearbox which put an end to his dreams of victory. Number 51 returned to the box and the AF Corse crew was successfully able to fix the gearbox, putting Bruni back on the track in time to recover 3rd place on the podium, behind number 71 in 2nd place and Chevrolet in 1st.

For Ferrari in the GTE-Am category, in addition to the satisfaction of Andrea Bertolini's and the SMP Racing team car's victory, there was also the joy of seeing a second car on the podium in the Am category, it was Scuderia Corsa no. 62 of Bill Sweedler, Jeff Segal, and Townsend Bell. Of note in this category are also the fourth and fifth place wins of AF Corse cars no. 83 (Collard-Perrodo-Aguas) and 61 (Mann-Cressoni-Giammaria). Next race will take place on August 30th at Nurburgring in Germany, the only new stop included in the WEC calendar as compared to last year.

Antonello Coletta, GT Competitions director: "Today was a rewarding day under some respects, but a disappointing one from another point of view. An analysis of the race in the GTE-Pro class shows that there was a clear potential to win the race: we took the lead immediately, but then we had a serious accident which cost us a great deal of time. The drivers of car number 51 rolled up their sleeves and made a comeback, displaying their own and the car's speed qualities, as well as the strategic intuitions that often characterised our racing performances. Unfortunately, a mechanical failure one and a half hours from the finish deprived us of a win which seemed certain.

Despite our bad luck, we were able to take second and third place, thus earning very important points for the world championship standings. We won two of the latest four editions of the Le Mans 24 Hours, and took second place twice, proving once again that we are at the top; but, certainly, we would have liked to climb one step higher.

On the other hand, I am very pleased with the outcome of the GTE-Am class, in which the SMP Racing team won, with one of our drivers, Andrea Bertolini. I am also happy that Scuderia Corsa, the American team that took part in the Le Mans race for the first time, earned the third step in the podium."

Andrea Bertolini, driver car 72 (GTE-Am winner): "This win was really needed, it was missing from my record and obtaining it with SMP is something special because this is the first time that a Russian team wins the 24 Hours. All the boys did a great job; we always believed in it and we never gave up, during our lengthy struggle with the Aston Martin number 98. Le Mans proved itself once again to be a race in which concentration must stay at a maximum to the very last turn. As always, our car was extremely reliable and never suffered any problems. My first thought? To get some rest. I did several triple stints and fatigue is catching up, now that the race is over. This win will taste even more special tomorrow morning, when I wake up and I see the trophy on the table.”