The unique Nissan DeltaWing passed more important tests tonight in preparation for its race debut in this weekend’s 80th running of the 24 Hours of Le Mans. 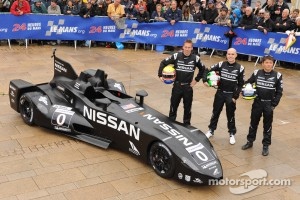 The team had two distinct targets tonight – ensuring all three drivers completed their mandatory “night” laps prior to the race, as well as testing the car’s unique lighting system in night conditions.

The Nissan DeltaWing features four lighting pods – two in the nose and one each on the rear wheel arch of the car.

Drivers Marino Franchitti (Scotland), Michael Krumm (Germany) and Satoshi Motoyama (Japan) were all able to complete their required mileage, after Wednesday night’s first qualifying session was cut short when the car’s on-board fire extinguisher went off after the car struck a kerb. As part of the safety systems built into the car, the extinguisher activation instantly shuts down the car’s electronics.

Invited to compete last year by the Automobile Club de l'Ouest as an additional 56th entry, the Nissan DeltaWing features half the weight, horsepower, aerodynamic drag, tire and fuel consumption of a typical Le Mans prototype.

Teams have one final on-track session on Saturday morning from 9:00am to 9:45am before taking the green flag at 3:00pm

SATOSHI MOTOYAMA
“We had a solid run tonight, with everyone getting in their mandatory night laps.

“We still have a few little issues but, considering what has been achieved with this car in such a short space of time, it is remarkable that the car has performed as strongly as it has.

“Nissan has a huge presence here in Le Mans and, obviously, the Nissan DeltaWing has really been a huge part of that.

“I’ve been thrilled to be part of such an innovative program and it is quite remarkable to consider that we could finish the 24 Hours of Le Mans on half the fuel of a typical prototype.

“We still have a lot of work to do to achieve that, but everyone is working very hard on ensuring we give it our maximum effort.”

MARINO FRANCHITTI
“I’m obviously delighted to get all three drivers qualified for the race on Saturday.

“We got our night laps in and worked very hard on the race car – not a qualifying car. We didn’t concentrate on qualifying speed at all – it was about race preparation.

“We do have some brake issues, which we are working through. We found some solutions at the end and Michael’s pace in the dark was good.

“We learned a great deal tonight and had our first real run in the dark.

“The guys have got a busy day ahead of them preparing the car, but now we’re all ready to take the Nissan DeltaWing racing on Saturday.

“It was a great job of mine to not crash tonight!

“I was really pleased we all got qualified for the race tonight after losing so much time last night, when the fire extinguisher went off, shut down the electrics and we got stuck on course.

“Everyone got their laps in the dark and we had a relatively trouble-free run. We have some minor brake problems we’re working on before the race.

“These things are to be expected because we have had a really short preparation time for the car.

BEN BOWLBY - Nissan DeltaWing, Designer & Concept Originator
“Today we had a few silly issues with bleeding the brakes. We have some part of the system that is introducing air that we haven’t identified.

“The hydraulic system is one part of the car that is certainly not an innovation, but it is causing us trouble.

“This is not your normal 24 Hour race – it really is special. It will be very interesting in the race. I don’t have great expectations as to how we will go, because there are a load of simple things that can go wrong.

“On the other hand, we might surprise some people. We know the car can be very fast, we know it is very efficient and we know it races extremely well in traffic amongst other cars.

“Saturday, it will be time to get stuck in and see what happens.”

DARREN COX - General Manager, Nissan in Europe
"Everything went according to plan today. We had one job to do - to qualify the three drivers - and we did that with ease.

“We even had a chance to do some work on setting the car up and we discovered that it was very easy to find time in the car and make it easy to drive.

“Getting the car into the race is a success in itself. Lots of people said we couldn't do this but, when we line up on the grid on Saturday, we will have earned the right to do so, so we're all very happy."

DON PANOZ - Managing Member, DeltaWing Racing Cars
“I am very proud of the effort that everyone has put in to bring this dream to reality. There were so many people who doubted that this car would even turn, let alone get to Le Mans.

“We’re now in the race and our plan is to show what we can do – not racing for the win – but showcasing the benefits of concentrating on efficiency.

“The fans have already been hugely supportive of the car all week and I am sure that will continue to be the case at the driver’s parade and pit lane tours tomorrow and the race on Saturday and Sunday.”