Victories do not always resemble one another. Pegasus Racing won its category again in the Spa-Francorchamps event but this time the success was obtained in very different conditions to the team’s victory at Le Castellet. Unlike many others, Germans Micro Schultis and Patrick Simon, and Frenchman Julien Schell kept out of trouble throughout the 1000-km race. Thanks to their consistency they saw the flag in second place behind a car that was subsequently disqualified for a technical infringement. They inherited victory, and this has helped the team from Strasbourg to consolidate their position as leader in the championship.

We were happy to finish in second place and even more happy when we got the information that we were first.

This year, the Spa-Francorchamps 1000 kms counted for two championships, the Le Mans Series in Europe and the newly-created Intercontinental Le Mans Cup whose worldwide impact has attracted manufacturers like Peugeot and Audi. The French and German squads came to Belgium for a dress rehearsal for the Le Mans 24 Hours. Fifty-three prototypes and GTs raced together on the majestic circuit laid out in the Ardennes, one on which Pegasus Racing has often met with success. For example, the team scored a great double in the VdeV 500 km in 2009, and in its first season in the Le Mans Series in 2009, it came home fourth in the LM P2 class.

The outfit from Alsace’s organization and its endurance know-how once again worked marvels at Spa. Julien Schell took the first double stint, and he contented himself just to keep an eye on the battle between his three rivals for first place in the Formula Le Mans category. He was in the first three when he handed over to Mirco Schultis. The German was very quick, but after only 45 minutes he had to stop as he was suffering from a high fever. Patrick Simon took over for another 2 strong stints from which he emerged in second place. Mirco got back in the car to complete the obligatory 75 minutes track time to enable him to score points. He managed – just. Schell jumped back into the Pegasus Racing FLM 09-Oreca and brought the car home to the finish of the 6-hour race. Despite this extra driver change, the no. 95 FLM saw te flag in second place on the same lap as no. 91 entered by the Hope Racing team. After post-race scrutineering the Strasbourg team was declared the winner! 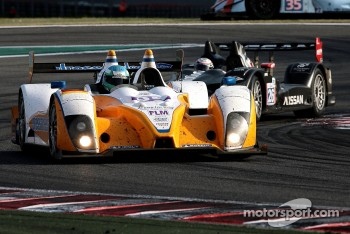 Schell had a busy weekend at Spa-Francorchamps as he spent almost 3 hours in the car in the race plus practice, and he also competed in the 2 Speed Euroseries curtain-raisers. “Racing here is always a pleasure. We lacked a little speed, but we were very consistent and cautious to make sure we avoided the many pitfalls. The only unexpected hitch was the additional stop to change drivers. Despite this, we finished on the same lap as car no. 91. We weren’t expecting to be leading the championship with two victories after two races. But there’s still a long way to go, and with the current points scale, our lead isn’t very big. To bag the title you have to finish every time - in the first two if possible!”

“The aim was to really drive the car easy to avoid destroying the tyres, and to keep a consistent pace, but the traffic made it quite a difficult task” said Patrick Simon. His fellow compatriot Mirco Schultis concluded: “although I still had my cold and fever on the race day, it went kind of ok. I decided to do two separate stints and rest a while between them, instead of the usual double stint. I wasn’t feeling well, so it was safer to take some more time in changing driver, because it helped me to have better laps. We were happy to finish in second place and even more happy when we got the information that we were first. I am sorry for Hope Racing, they did a good job on the track and their lap times were much better than ours.”

The next round will be in Italy on the Enzo and Dino Ferrari circuit in Imola on 1st-3rd July.