As in Le Mans, the battle for pole position was very keenly disputed by the ILMC’s leading contenders. Anthony Davidson (no.7) recorded the fastest time of the weekend, securing the Peugeot 908’s second pole position in its young career. Stéphane Sarrazin qualified third in the no.8 car.

Scrap for pole comes down to just a few tenths

With less than two tenths between the top three cars, free practice suggested that the fight for pole position would be very close. The Italian fans were thrilled by the show put on by the sportscars in their intense 20-minute qualifying session, where the key to fast times lay in being able to combine peak tyre performance with good traffic management.

Out on track as soon as qualifying started, Anthony Davidson (no.7) devoted his first few laps to getting the tyres up to temperature. Sensing the growing power of his Peugeot 908, the British driver waited for the right moment to push. With 12 minutes of the session gone, he set a stunning time of 1’31’’736, over 7/10ths clear of the first Audi!

We worked hard in the three free practice sessions and achieved a good performance leve.

“The car was fantastic to drive. We worked hard in the three free practice sessions and achieved a good performance level”, he said at the end of the session. “It wasn’t a perfect lap, because I had to slow down in a sector where the yellow flags were out.”

Having gone out to set a fast time a little after his team-mate, Stéphane Sarrazin split the two German cars a few minutes later. The Peugeot 908 no.8 driver stayed out on track to try and improve his time, but was held up in traffic in the closing minutes of the session.

By putting its cars in P1 and P3, Team Peugeot Total is very well placed for a tough race.

Olivier Quesnel: “Anthony produced an extraordinary lap, taking pole position by an impressive margin. His performance is all the more staggering for the fact he had to slow down in a sector where the yellow flags were out! This means nothing for the outcome of the race, but it’s always best to start at the front. After having entrusted qualifying to Anthony and Stéphane [Sarrazin], we will let Sébastien Bourdais and Franck Montagny start the race. Given the competition from our rival, I think our strategy has to be to attack from start to finish.” 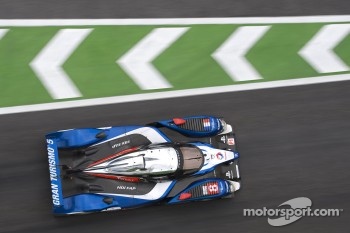 Anthony Davidson (Peugeot 908 no.7): “I am very proud to take another pole position for Peugeot, after my pole at Petit Le Mans last year. It was a very close fight again between Peugeot and Audi. In order to try and get a clear run at the track at the start of the session, I had positioned myself at the front of the pit lane exit. But the session started five minutes late so my tyres had cooled down by a few degrees. As I had enough fuel, I devoted the first few laps of my run to getting the tyres back up to the right temperature. The team managed this perfectly. After Le Mans, it’s great to prove just how quick the 908 is. We now have to think about the race. The situation will be very different and we expect six hours of difficult racing, with a lot of cars out on track and in the pitlane. That will be a major concern. The hardest part is still to come.”

Stéphane Sarrazin (Peugeot 908 no.8): “I quickly found myself behind a group of cars and wasn’t able to get the most out of the tyres and the 908. However, third place isn’t a bad result. We are going to do some more work on the setup, change a few details to improve the balance. Since the start of the weekend, we have seen that the Peugeots are quick and we will do our utmost to make sure we are just as strong in the race.”