After the 24 Hours of Le Mans race where Audi was victorious, the Le Mans Series and Intercontinental Le Mans (ILMC) cup entries are set to continue their battle for the glory and for the win of the championships with the Italian event of the championships known as 6 hours of Imola. Anthony Davidson took the pole for Peugeot while Audi’s Marcel Fassler was second followed by Stephane Sarrazin (Peugeot) on the Autodromo Enzo e Dino Ferrari circuit. The best LMS team for this year’s championship, Rebellion Racing, starts from 6th. 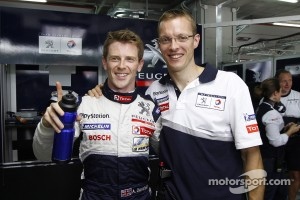 LM P1 qualifying saw once more the two rivals, Audi and Peugeot, fight for the pole position. This time Peugeot was slightly quicker and the pole position went to the Peugeot Sport number 7 entry with the time of 1.31.736 driven in qualifying by Davidson whose co-driver is Sebastien Bourdais. Second place on the grid however was taken by Audi Sport number 1 entry of Timo Bernhard and Fassler with the time of 1.32.354. The first-time winner at Le Mans, Fassler, was just in front of the number 8 entry of Peugeot Sport driven by Franck Montagny and qualifier Sarrazin.

After qualifying Peugeot Sport and Anthony Davidson were seen as happy as the team looks to increase its lead in the ILMC championship fight against Audi. “The battle between us continues,” laughed Davidson. “It’s always good to start from pole. This race is not only long, but with the all traffic on the track it’s also a question of survival. Our aim in this round is to increase our lead in the ILMC classification.“

About his front row position, Fassler said, "In qualifying there was a lot of traffic, I had only one really free lap. On the whole I’m happy with my second place. I’m optimistic for the race because our R18 TDI is very good across the whole distance. But the traffic in the race will probably be the biggest problem."

For the teams aiming for the Le Mans Series title, the top 3 did not see any real surprises considering the early predictions and how the season has been progressing so far. This time through, Rebellion Racing seems to be the team to beat in Imola as both cars, the number 12 entry of Neel Jani and Nicolas Prost and number 13 entry of Andrea Belicchi and Jean Christophe Boullion managed to put fastest time on the board over the Pescarolo Team. Rebellion cars will start the race from 6th and 7th spot on the grid with the Pescarolo of Emmanuel Collard, Christophe Tinseau and Julien Jousse just behind in 8th..

In LM P2 the Oreca 03-Nissan package seemed to be the combination to beat today in qualifying as TDS Racing and Boutsen Energy Racing, with similar packages, will start tomorrow´s race from the front row of LM P2.

Le Mans Series entry, TDS Racing and their drivers Mathias Beche, Pierre Thiriet and Jody Firth were the fastest crew today, setting the lap time of 1.37.208 with Beche behind the wheel. The quickest LM P2 entry will start the race from 10th on the grid. Second quickest in class, Boutsen Energy Racing‘s Dominik Kraihamer and Nicolas De Krem lost the pole by 0.268 seconds. Third fastest in class and first of the teams using the HPD ARX-01d was Strakka Racing but they are still looking for their first win an this season and the first one in Imola would surely taste good.

For ILMC entries quickest was Signatech Nissan team which qualified 4th in class. For other notable ILMC entries, the American Level 5 Motorsports with its Lola-Honda Spyder was 6th fastest in LM P2 and will start the race from 15th overall.

With only four FLM entries the American Genoa Racing was the fastest when Elton Julian managed to put the best time on the board just slightly quicker than JMB Racing´s Nicolas Marroc. Third fastest in FLM went to the LMS championship leaders Pegasus Racing while Hope Racing finished the qualifying as slowest of the FLM entries. 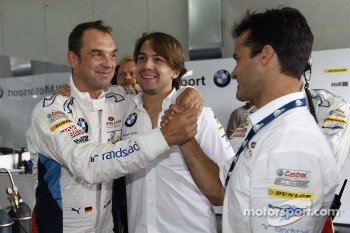 The ILMC manufacturers’ championship leaders, BMW, were in form today by taking the pole position and 2nd fastest time for the LM GTE PRO class. It was BMW Team Schnitzer whose M3s in hands of Augusto Farfus and Jörg Müller were faster than their team mates Dirk Werner and Pedro Lamy and the rest of the LM GTE squad, earning BMW a well-deserved front row for tomorrow´s race. Müller and Werner were handling the qualifying duties for BMW and after qualifying the whole team was a bit surprised to be on pole position at Imola and while the team was praising it´s drivers and Dunlop tyres, pole sitter Müller was already settling his mind for tomorrow´s race.

“The field is also extremely close together here in Imola,“ said Müller. "The top nine cars are covered by one second. This makes it even nicer that we managed to put both BMW M3 GT cars on the front row. On this track it’s crucial to get a clear lap in qualifying. This worked out straight away. Tomorrow it’s expected to be really hot, and this should play into our cars’ strengths. But you never know what happens during such a long and tough race. After the 24-hour classics in Le Mans and at the Nürburgring, however, I don’t expect major surprises for us.”

Third fastest in class and first of the Ferrari teams was AF Corse´s LMS entry number 71 of Toni Vilander and Jaime Melo. For the Ferrari, the qualifying was strong through since for tomorrow´s race, they will start from top 6 three cars: Two AF Corse team cars, Luxury Racing and JMW Motorsport. All qualified very close to each other and are all using the Ferrari F458 Italia´s. As from Imola to Maranello is just more than 100km´s the race is surely very important for all teams using Ferrari cars. For the ILMC points, Luxury Racing’s number 59 is ahead of the number 51 AF Corse on the grid.

LM GTE AM: Proton Competition and Porsche the fastest

For the LM GTE AM teams, it was Porsche which was in form as Proton Competition with their drivers Patrick Long and Gianluca Roda taking the fastest time and the class honors. Long´s fastest lap time was even fast enough to beat a few LM GTE PRO entries.

Second and third quickest times in LM GTE AM qualifying were two Ferraris when AF Corse´s Piergiuseppe Perazzini, Marco Cioci and Stéphane Lémeret were just ahead of Krohn Racing´s Tracy Krohn, Nic Jönsson and Michele Rugolo, who managed to improve their times at the end of the session and therefore left behind the early leader of the session, IMSA Performance Matmut and their Porsche dropped to 4th on the grid. The early favourites and Le Mans 24 hours LM GTE winners, Larbre Competition with their Corvette was 5th fastest.