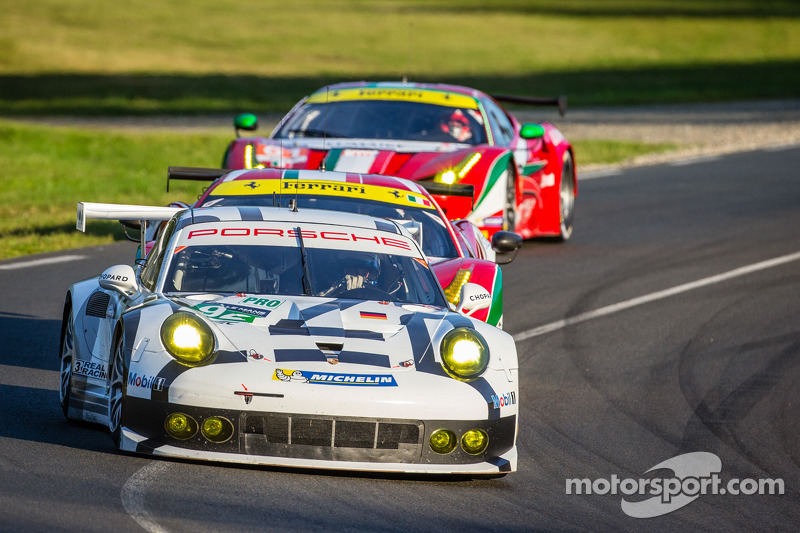 Scoring second in the GTE-Am class, Porsche junior Klaus Bachler celebrated the greatest success of his career by now at his first ever Le Mans race.

Stuttgart. Podium placing for Porsche at the 24 Hours of Le Mans: Porsche Manthey squad’s 470 hp Porsche 911 RSR driven by works drivers Marco Holzer (Germany), Frédéric Makowiecki (France) and Richard Lietz (Austria) took the flag at the 82nd edition of the long distance classic at the Sarthe third in the GTE-Pro class. Scoring second in the GTE-Am class, Porsche junior Klaus Bachler celebrated the greatest success of his career by now at his first ever Le Mans race.

The race on the 13.269 kilometre Circuit des 24 Heures kept more than 200,000 spectators on the edge of their seats with enthralling fights for positions and spectacular overtaking manoeuvres. When two heavy rain showers left parts of the track underwater several hours after the start, the squad initiated the perfect pit stop strategy which put the Porsche 911 RSR in positions one-two. However, the winning car from last year, based on the seventh generation of the iconic 911 sports car and double winner of the Sports Car World Championship WEC season-opener, was unable to defend these positions over the rest of the marathon. 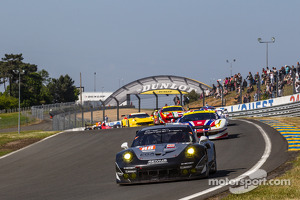 In addition, during the night a fuel pressure problem cropped up with the 911 RSR driven by works drivers Joerg Bergmeister (Germany), Patrick Pilet (France) and Nick Tandy (Great Britain) which required an extra pit stop and finally threw the trio back to seventh place after their strong performance.

Their factory pilot colleagues in the #92 Porsche 911 RSR continued on their podium course. With three hours to the flag, they had moved up the order to lie in second place before losing a position in the dramatic final phase. The podium result was a well-deserved reward for a strong performance under difficult conditions.

Comments after the race


Hartmut Kristen, Head of Porsche motorsport: “Although it was enough for a podium spot, this year’s Le Mans was a little disappointing. Minor technical problems cropped up in both our 911 RSR, but as a total they were decisive. The crew and the drivers have done an excellent job and brought the cars safely home. I praise them for this. Congratulations as well to the Proton Competition squad for second place in the GTE-Am class. Given the performance rating, there was no better result possible for us.” Olaf Manthey, Team Principal Porsche Team Manthey: “We tackled the race with other expectations, but small technical gremlins can always turn up all the time. That’s nothing new for me. I’ve been doing this for 40 years. Both cars reached the finish line and third place is good. You win some, you lose some. You just have to make it through.”

Marco Holzer (911 RSR #92): “It was a long and demanding race. We faced all weather conditions you could possibly imagine. At times it was dry, then it poured with rain, half the track was wet and half dry. The car ran like clockwork until we had to pit unexpectedly shortly before the finish. That cost us second place. But the team did a great job and we earned vital points for the WEC.”

Frédéric Makowiecki (911 RSR #92): “Thank you to my pit crew. They were very fast and didn’t make one mistake. We constantly tried to push to the max and get everything we could out of the car. I regard this podium spot as a basis for even better results in the second half of the season.”

Richard Lietz (911 RSR #92): “After scoring first and second last year we were all expecting more. But some of our rivals were bluffing at tests and only displayed their actual race speed here. We tried to keep up and my teammates really went flat out. The podium spot is the just reward for this. I’m certain we’ll return next year even stronger.”

Joerg Bergmeister (911 RSR #91): “That’s unfortunately not the result we wanted and were hoping for. We experienced a problem that relegated us back down the order. Other than that the car ran well. A podium result would definitely have been possible. Unfortunately, of all places we had this bad luck here where double points are awarded.”

Patrick Pilet (911 RSR #91): “Our car was perfectly prepared for the race, but we experienced a problem during the night. Okay, we solved it but it cost us a lot of time. For this reason we couldn’t do a thing about the outcome of the race. But still, we can be proud of our team and Porsche. Now we have to concentrate on the rest of the season.”

Nick Tandy (911 RSR #91): “It wasn’t the best race, but with the exception of this one problem the car ran very well. The entire crew did a fantastic job. If the second twelve hours had run as well as the first, we would have achieved a fabulous result.”

Klaus Bachler (911 RSR #88): “Second place is awesome. A dream has come true for me. We did everything right, kept out of trouble at the start, only refuelled and changed the tyres. That’s how we got ahead. Now we’re all over the moon.”

Christian Ried (911 RSR #88): “The race was good, technically everything went smoothly. The car was great and so were the tyres – it simply all worked well. I’m really happy that we scored a podium spot.”

Patrick Long (911 RSR #77): “We certainly could have done more this year. Still I’m satisfied with our performance as a team. Our car didn’t have the slightest technical problem and Patrick improved constantly and posted super times. Not everyone can climb the podium at Le Mans. If it was that easy then everyone would have a Le Mans trophy at home.”

Patrick Dempsey (911 RSR #77): “I drove really well, didn’t make any mistakes and my pace improved constantly. We all did a great job against such tough competition and I’m happy with the result and the team’s great performance. I’ll definitely be back at Le Mans next year.”

Sébastien Loeb Racing thrilled with fourth place at the 24 Hours of Le Mans!