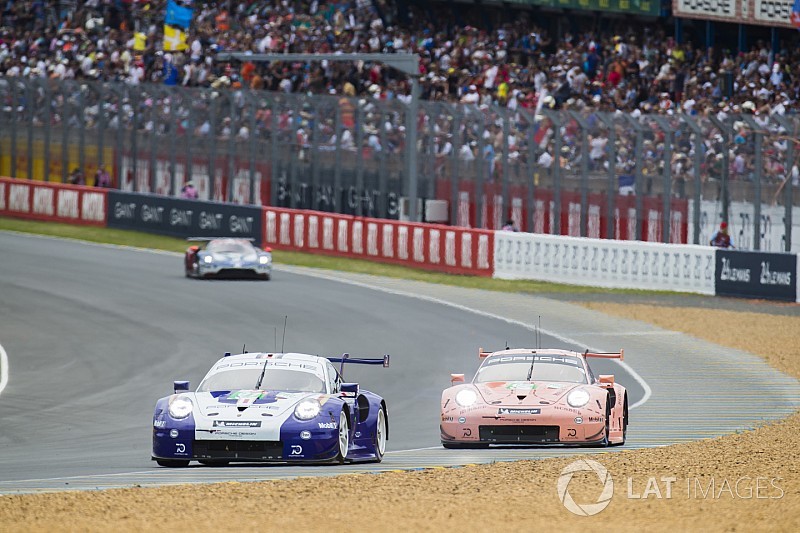 Sebastien Bourdais had no right to complain about Frederic Makowiecki’s driving during their fight in the Le Mans 24 Hours, according to Porsche GT boss Dr. Frank-Steffen Walliser.

Makowiecki's #91 Porsche was locked in a fierce battle with the #68 Ford of Bourdais in the latter stages of the race over second in the GTE Pro class, trading positions several times and coming close to contact.

After his stint, IndyCar star Bourdais hit out at Makowiecki for what he described as "unacceptable" driving, as well as blasting the Le Mans stewards for not penalising his rival.

But Walliser said that Bourdais was equally on the limit with his driving, and that his criticism of Makowiecki was therefore invalid.

Walliser told Motorsport.com: "Firstly, this is not a pony farm; secondly, in my view, it was hard but fair at all times. The scenes when Fred himself was pushed into the grass were not shown on TV.

"Apart from that - what do you expect when two Frenchmen fight for second place in the biggest French race? Is that supposed to be peace, joy, pancakes? I don't think so!

"There were two pros behind the wheel. They didn't give each other anything, there were no touches. For the fans it was sensational – and it's for the fans we do these races.

"That was the best publicity for our sport – four position changes in a single lap. Other racing series have less action in a whole year."

Makowiecki himself was remorseless about his fight with Bourdais, saying he wouldn't be the "last" person the Ford driver would complain about.

"He pushed me into the grass, he did exactly what I did," said Makowiecki. "At the end he's crying because I weaved a little on the straights.

"I'm not the first driver he's upset about in this way. And I guarantee I'm not the last one either."

Makowiecki and his teammates in the #91 Rothmans-liveried Porsche finished a distant second to the sister #92 'Pink Pig'-themed car driven by Michael Christensen, Kevin Estre and Laurens Vanthoor.

A safety car in the fourth hour broke up what had been an early three-way battle for lead honours, giving the #92 crew an advantage of two minutes that they maintained to the finish.

"The distance to the front would have been smaller if the race director hadn't slept," Makowiecki said. "He held us at the pit exit for a minute. That's why everyone else was so far behind the #92.

"If you're so far behind these days, there's no way you can make up for it with speed or any other means. On the contrary, you'll be even further behind with each safety car phase.

"It's a mistake in the rules, because that's how the race was decided after just three hours."