Porsche teams amongst frontrunners in both Le Mans 24 GT classes 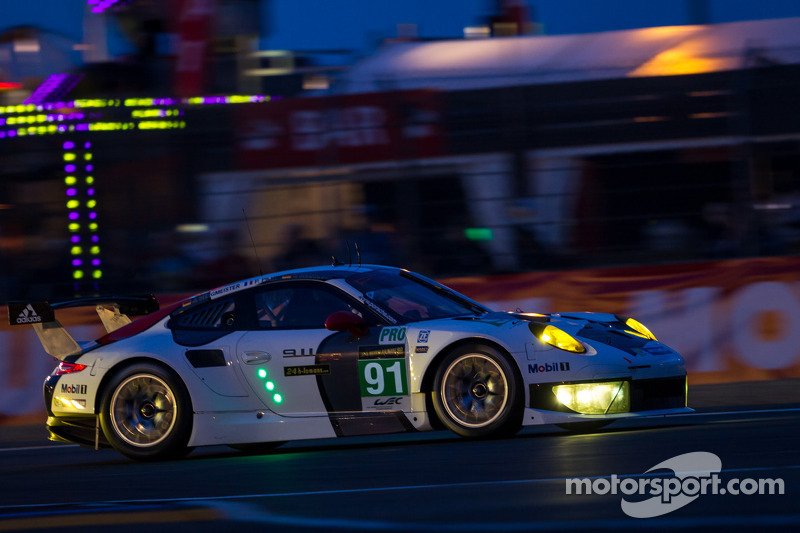 The fight for victory looks good for the Porsche teams.

Le Mans, France. At the Le Mans 24 Hours, the fight for victory in the strongly represented GT classes is looking promising for Porsche teams after the first half of the race. In the GTE-Pro class, the Porsche 911 RSR with the starting number 92 was running third at its Le Mans debut shortly before midnight. The sister 911 RSR with the starting number 91, also run by Porsche AG Team Manthey, is sitting in fourth. The only all-American team, that of the Porsche 911 GT3 RSR fielded by Dempsey Del Piero-Proton, is fourth in the GTE-Am class while the No. 76 IMSA Performance Matmut Porsche 911 GT3 RSR leads the class. 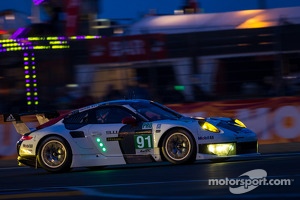 On the Circuit des 24 Heures, 56 vehicles took off at 4 p.m. Central European Time (CET) into the 81st running of the world’s most famous long distance race. In the very first race hour, with a long caution period due to an accident, Porsche works driver Marc Lieb (Germany) moved up into second place in the number 92 Porsche 911 RSR. After one and a half hours he even seized the lead until the first pit stop. He and his teammates Romain Dumas (France) and Richard Lietz (Austria) were locked in battle with the Aston Martin for the front spot. In the second 911 RSR, Porsche works driver Joerg Bergmeister (Germany) made up three places, only to lose more than one minute through a safety car phase. Nevertheless, after 12 hours of racing, he and his teammates Timo Bernhard (Germany) and Patrick Pilet (France) are still within striking distance of the front-runners.

Trailing the leading 911 fielded in the GTE-Am class customer team of IMSA Performance Matmut of Raymond Narac (FRA), Christophe Bourret (FRA) and Jean-Karl Vernay (FRA) is the No. 77 Dempsey Del Piero-Proton with Patrick Dempsey, Porsche factory pilot Patrick Long as well as Joe Foster. The No. 88 of Christian Ried (Germany) and his Italian teammates Paolo Ruberti and Gianluca Roda in the 911 GT3 RSR run by Proton Competition is fifth.

Joerg Bergmeister (No. 91): “Unfortunately we’ve had some real bad luck, I had just overtaken two Ferrari when the safety car was deployed right in front of me. We lost of lot of time because of this, I’m guessing a minute twenty. Then there was an incident in the pit lane with a Ferrari which shunted me towards the wall. And then my right rear tire lost air. So it’s not going exactly as we had hoped, but one thing’s for sure - we certainly have the speed.”

Patrick Pilet (No. 91): “I drove alone for quite some time so I didn’t have to battle against any other cars. It wasn’t exactly the most exciting stint of my career, but our Porsche is the epitome of reliability.”

Marc Lieb (No. 92): “My start was good and the car is running smoothly. I had an interesting fight with the two Aston Martins and that was fantastic.”

Richard Lietz (No. 92): “I drove a triple stint - that was a very long time in the car. We took a bit of a risk with the tires. In the Porsche curves I had to drive straight ahead to avoid an accident with a prototype. It’s pretty wild out there, especially now at night.”

Romain Dumas (No. 92): “We have to fight really hard to match the pace of the Aston Martin. Right now we are lacking that very last bit, but we’re trying to compensate as best we can. So far it’s looking pretty good.”

Wolf Henzler (No. 67): “At first the conditions were difficult. There were wet patches here and there. In one lap a corner was dry, in the next it was wet – or vice versa: That makes you extremely cautious when braking and you realize that you could have actually driven it much faster. Everything is running smoothly for us at the moment, we’re fast. At one point we were even leading but then we got a flat tire on the straight before the Indianapolis corner – at something like 200 kph [124 mph]. The car came sideways but luckily I managed to get it under control. Unfortunately it cost us a lot of time.”

Emmanuel Collard (No. 75): “During my first stint the changing weather made the track conditions very difficult. It started to rain again but we kept driving on slicks. This was not without risk.”

Jean-Karl Vernay (No. 76): “To contest my first 24 hour race in Le Mans of all places is an unbelievable experience. It wasn’t easy with all the traffic on the track, I had to be extremely careful. Our car is running beautifully, no problems here.”

Patrick Long (No. 77): “We have a very fast car with a perfect set-up. This morning we made some major changes to the set-up and it paid off. Directly after my first pit stop the tire lost air and I had to come back into the pits. This cost us a lot of time. Still, we’re very relaxed. We know that our car is good enough to run with the leaders.”

Patrick Dempsey (No. 77): “My first stint was okay. I didn’t want to make a mistake so I didn’t push too hard. The constantly changing track conditions made the whole thing rather entertaining, but also tough. I’m definitely having a great time. The Porsche is fantastic to drive.”

Christian Ried (No. 88): “That was so funny on the track. It was really hard to adjust to the changing conditions. The main thing was to keep the car on the circuit and not do anything stupid.”