Since 2007, Audi and Peugeot have been the only manufacturers contending for overall victory at the 24 Hours of Le Mans. In three years time, Porsche can add its name to that list once again. 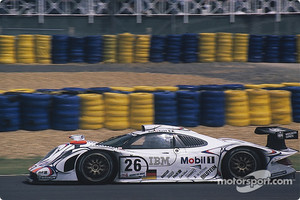 The German manufacturer announced Thursday morning that 2014 will mark its return to the top class at Le Mans, LM P1, with a works-run prototype.

We want to follow up on this with the 17th outright victory.

“Motorsport was always an essential part of the Porsche brand,” said Matthias Müller, President of the Executive Board at Porsche AG. “So for us it was only a matter of time before we returned as a factory to the top league of racing. Porsche’s successes in Le Mans are unrivalled. We want to follow up on this with the 17th outright victory.”

Porsche last won overall in 1998 with its GT1-98 closed-top prototype and a trio of Stephane Ortelli, Allan McNish and Laurent Aiello behind the wheel. That marked the last of its 16 overall victories, and coincidentally kicked off a streak of 14 consecutive overall victories for tire manufacturer Michelin.

Never resting on its laurels, Porsche has still garnered success in the years previous with the RS Spyder LM P2 prototype which captured class honors in 2008 and 2009, and the venerable 911 GT3 RSR has secured countless victories and championships worldwide — including in its class at Le Mans from 2000 to 2005, 2007 and 2010. 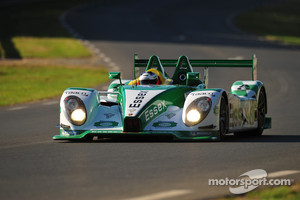 Those statistics, coupled with the success of the Porsche 911 GT3 R Hybrid in its worldwide races, showcase the engineering at Weissach, said Wolfgang Hatz, Board Member for Research and Development at Porsche AG.

“With the RS Spyder we proved that our motorsport engineers in Weissach are at the forefront,” Hatz said. “For instance, we were the first to run a high-revving race engine with direct fuel injection, DFI, setting new standards in performance and efficiency. Recently, with the 911 GT3 R Hybrid, we adopted a completely new drive technology for racing purposes and achieved a considerable reduction in consumption.”

Details were vague on the specifics of the new prototype, revealed on the Porsche website and a company-released YouTube video. In recent years, the company has shown a direction toward renewable energy and hybrid technology in its new models. Yet-to-be-determined 2014 regulations at Le Mans potentially could portend a car of a similar ilk.

Its 911 GT3 R Hybrid has starred in a handful of races, the 24 Hours of the Nurburgring twice (2010 and 2011) and also in 2010 Intercontinental Le Mans Cup events at Petit Le Mans and Zhuhai, China. The 911 Hybrid utilizes a flywheel system with two electric motors and its 4-liter flat-six engine at the back. 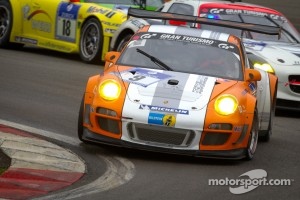 Additionally, the manufacturer revealed its 918 RSR sports prototype at this year’s North American International Auto Show in Detroit in January, which has a 563-horsepower gasoline V8 engine driving the rear wheels with power to the front provided by a flywheel KERS system and dual electric motors driving the front.

Hartmut Kristen, Head of Porsche Motorsport, looked forward to development and what the new 2014 regulations will entail.

“We’re looking forward to the task of developing new technologies and to continue on with the success of the Porsche RS Spyder,” he said. “After the conclusion of our works-supported sports prototype program in the American Le Mans Series we have kept up with the latest technological advances. Now we will begin with detailed research in order to evaluate the various concept alternatives for our new car. These obviously depend on how the regulations for the year 2014 look in detail. In principle, these regulations are interesting for us because the integration of our hybrid technology in the vehicle concept is one possible option.”

An update from Audi Sport, Porsche's sister brand, in a statement said this decision was a purely Porsche one:

“This is the decision of Porsche company, a decision in which Audi is not involved. Audi relishes the prospect of every strong new opponent at Le Mans and in the new FIA Sportscar World Championship. Porsche’s entry into the LMP1 class is evidence of the high level of attraction of sport prototypes”.