Rebellion Racing is heading to France for the 90th anniversary edition of the Le Mans 24 Hours on 22-23June with confidence and strong determination.

Rebellion Racing will be putting the team’s two Lola-Toyota B12/60 Coupé LMP1 prototypes through the toughest endurance aiming for a podium finish whilst battling for top Privateer and petrol powered honours, repeating last years and recent successes.

Rebellion Racing finished as the best privateer car in the 2011 and 2012 edition of the Le Mans 24 Hours (6th and 4th overall), results that helped the team to finish the season as the best Privateer in the 2011 ILMC and the 2012 FIA Endurance Trophy for LMP1 Teams in the FIA World Endurance Championship. 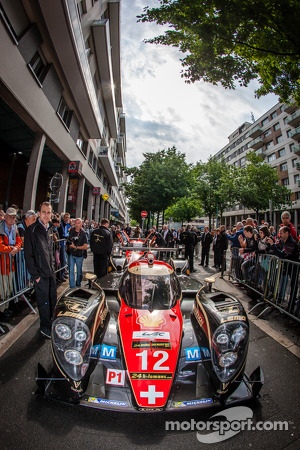 The Swiss team go into this year’s Le Mans 24 Hours as the current leaders of the FIA Endurance Trophy for LMP1 Teams after having achieved a 1-2 finish at both the first two rounds of the 2013 FIA World Endurance Championsip at the 6 Hours of Silverstone and the 6 Hours of Spa.

The Swiss team were satisfied with the Le Mans test day last Sunday (9th of June). All the latest developments and updates pleased the drivers and the engineers were reassured about the potential of the cars for the forthcoming race.

The "3N" trio that prevented Audi's clean-sweep in last year’s Le Mans 24 Hours by claiming the fourth place finish, will be reunited in the #12 Lola-Toyota. Nick Heidfeld (Germany), Neel Jani (Switzerland) and Nicolas Prost (France) won the FIA Endurance Trophy for LMP1 awards at the 6 Hours of Silverstone and the 6 Hours of Spa and recorded an historical podium finishing at the 12 Hours of Sebring last march.

In the Team’s sister car, the #13 Lola-Toyota, Andrea Belicchi (Italy), Mathias Beche (Switzerland) and CongFu Cheng (China) will line up together for the fourth time only but will be again serious contenders for a strong result in this year Le Mans 24 Hours after two second place finishes at the 6 Hours of Silverstone and the 6 Hours of Spa.

First ‘rendez-vous’ for the team is scrutineerings in downtown Le Mans on Monday 17th june, 11h3à for Lola-Toyota #12 and 11 :40 for sister car #13. A great opportuniny for the fans and the public to meet the drivers and have a close look at the cars.

OPINION: Forget the movie Ford v Ferrari, there’s going to be an imminent remake of Porsche v Ferrari – only it’s not going to be on the silver screen but on the racetracks of the world… and the stock market.

Seven-time NASCAR champion and IndyCar sophomore Jimmie Johnson has announced he is to step down from full-time racing in 2023.