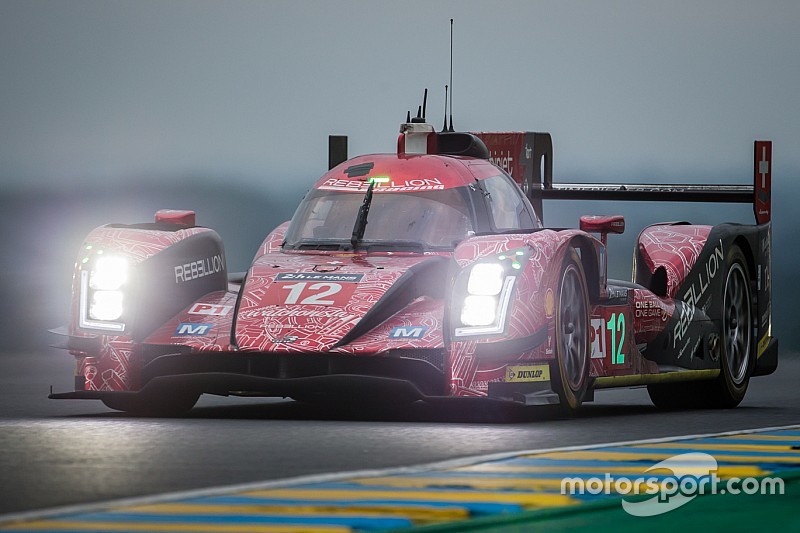 The race was not a trouble free one though for the #12 crew, they had to pit to replace a malfunctioning engine air intake temperature sensor in the early laps of the race, they were forced to stop twice for clutch changes and the fuel injectors were replaced as a precaution on Sunday morning. Once again the team’s mechanics and engineers showed their skills and team spirit with efficient interventions to get the car #12 back out on track to take the chequered flag.

The Rebellion Racing #13 car was forced to retire during the night, 13 hours into the race, whilst battling with Audi #8 for fifth place overall after a fuel injector failure stopped the engine in the car. A small fire through the exhaust was quickly extinguished, saving the car from any serious damage.

Alexandre Imperatori, Dominik Kraihamer and Mathéo Tuscher were not rewarded for their strong pace all week. They had secured the pole position in the LMP1 Privateers with the seventh fastest overall laptime. During the race they reached fifth place overall and had ambitions of a top four finish as some of the Manufacturer cars encountered difficulties.

The team will now take a short rest before preparing for the remaining FIA WEC races, starting with the 6 Hours of Nurburgring in just a month’s time followed by the “fly-away” tour with Mexico, USA, Japan, China and Bahrain.

Bart Hayden - Rebellion Racing Team Manager: “We are happy to secure the LMP1 Privateer win in the 2016 24 Hour race at Le Mans, but we are also somewhat disappointed that we were not able to get both cars to the chequered flag and that we had to spend time in the box repairing the #12 car. It’s true that the Manufacturers also had problems with their cars, so it shows how tough the 24 Hour race at Le Mans is.

When our cars were running cleanly, the pace was pretty good and car #13 was in fifth place overall on merit when the problem with the fuel injector ended its run, that was a really hard moment.
After the ByKolles car encountered its race ending problem, we decided to make a precautionary stop to change the injectors in car #12, that lost us more time, but the car made it to the end of the race, so perhaps it was a good decision.

We had come into the 24 hour race with justified optimism after back-to-back overall podiums in the first two races of the season and were hoping for a really strong result. It’s great to claim the LMP1 Privateer win, but our ambitions were for even more.”