Less than a day is left to the start of the eightieth edition of the 24 Hours of Le Mans. Drivers and team reached the French circuit last Sunday and after sportive verifications, official pictures and autograph sessions, they eventually got on track for the first time on Wednesday in two free practice sessions that officially opened the third round of the FIA WEC 2012. 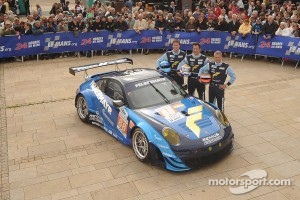 Paolo Ruberti, twice on the podium of the race in the past and current leader of the classification of the world LM GTE Am Championship together with the other lineup members Gianluca Roda and Chistian Ried, will be back this week -- three years after the last time - to compete in the nicest race in the world without hiding the desire to aim to another important result in a season where he has always been among the protagonists.

The three qualifying sessions saw the number 88 Porsche lined up by team Felbermayr-Proton ending with the fifth place of the category (3'59.181), that was also worth the third place among the Stuttgart's GT cars.

Paolo Ruberti:
"I am really happy for being again present at the 24 Hours of Le Mans that is certainly my favourite race. We started the season with a great victory in Sebring and things went pretty well also in Spa where we ended second; our ambition is to confirm ourselves on top of the LM GTE Am here too, especially considering that this round will award twice the usual points, but it is not going to be easy though. We have the necessary potential and we are confident we can do good things".

TV coverage of this event will be remarkable as it will entirely be followed live by Eurosport starting from 15.00 (GMT+2), with ample specials and warm up live at 09.00 (GMT+2).

Stéphane Sarrazin: We could annoy the Audis