Sébastien Loeb Racing thrilled with fourth place at the 24 Hours of Le Mans!

The Alsacian squad not only finished but claimed an impressive top five finished in LM P2, one of the most competitive categories in the race.

Since its creation at the end of 2011, Sébastien Loeb Racing had made the 24 Hour of Le Mans one of its goals. As difficult of a challenge as it is, the mission was accomplished in satisfactory fashion by the team co-founded by Sébastien Loeb and Dominique Heintz. As the team was discovering Le Mans for the first time and with two « rookies », the Alsacian squad not only finished but claimed an impressive top five finished in LM P2, one of the most competitive categories in the race.

In a particularly difficult race, marked by numerous ups and downs, the Sébastien Loeb Racing team was able to avoid all potentially major problems put in front of it. With solid stints in the No. 24 ORECA 03R, Sarthe native Vincent Capillaire, Czech driver Jan Charouz and German driver René Rast finished the race with an impressive eighth place overall and fourth in class. A great way to discover the legend of Le Mans. 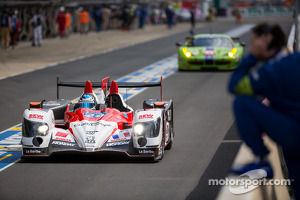 " I’m proud of the entire team » admits Sébastien Loeb, present in his role as team manager. « We are happy because we reached our goal. Realistically, we weren’t necessarily hoping for better than a top five finish. In the end, we simply followed our game plan : we told the drivers not to push any more than they could handle. And that’s what they did. We didn’t make any major mistakes. There were a few details here and there, but that’s normal for a young team. We managed the pit stops well and everyone did a good job. It was a good way to debut at Le Mans. "

" I don’t know what to say » exclaimed an emotional Dominique Heintz, Team Principal. « We’ve been dreaming about this race for so long. We took the chance to delay our first participation by a year and I’m convinced that was the right choice, because it was a thought-out decision. We had to come here well prepared. We had an almost perfect race, but it’s normal to have a few little errors for a debut. We decided to lead a smart race and that was the right call. We had to stay humble, but we knew if we avoided issues that we would finish well. We’ve just added a very important line to our CV. Of course, finishing fourth in LM P2 and eighth overall gives us the motivation to do more. But to come back, we have to start working tomorrow already. And we also want to savour this result ! Bravo to the entire team, especially Léo Thomas for this technical contribution. Bravo to the drivers. They got along well and they were solid together. All of this hard work has now been rewarded and I hope we can continue on like this together. "


On Saturday at 3 p.m. as the French flag is dropped, René Rast is the one to start the very first 24 Hours of Le Mans for Sébastien Loeb Racing. Starting 11th, the German quickly gains two positions. Thanks to a good first pit stop he reaches seventh place, then sixth. As he fights for fifth place, a green safety cone gets lodged underneath the car and leads to a quick off through the gravel trap at Mulsanne. Following a quick pit stop, Vincent Capillaire takes over. As the rain makes intermittent appearances, as well as the safety car, Vincent avoids any issues over the course of a three-hour plus stint.

Jan Charouz then begins his double stint which he finishes just outside the top five. In the night and into the morning hours, the three drivers of the No. 24 put in triple stints without problem. Shortly before the final quarter of the race, the trio of drivers – still triple stinting – reach fifth place, and even fourth with a little over four hours to go despite a wheel gun issue. Smart and efficient, René, Vincent and Jan are able to avoid all issues during a race that was marked by ups and downs for competitors. Proof of the team’s consistency, René Rast claims the car’s fastest race lap in the last hour! A performance that leads to a fourth place in LM P2 and an impressive eighth place overall for the No. 24 !

René Rast: " I’m very happy with this result. The most important was to finish the race and to gain a max of experience. I can say that we learned a lot ! The team did a good job, as did my teammates. Overall, my stints went well. At night, the car handled really well. That part of the race is unique and you had to get used to it. At the end of my last stint, Léo (Thomas) told me to push. We didn’t know what might happen up front and we were aiming for this fourth place, which we had to go get ourselves. I was lucky enough to be the one to take the start and also the finish. These are special moments and consequently incredible experiences. "

Jan Charouz: " To be honest, I had a complicated race. I wasn’t happy with the steering, where the sensitivity seemed variable and the way the tyres were handling. In addition, I couldn’t see very well in the mirrors, which made traffic difficult. It wasn’t easy but we were mistake free. The drivers did a good job. It’s a good top five finish : we always want to fight for first place at the start, but it’s a good result for the team which was making its debut at Le Mans. "

Vincent Capillaire: " To finish is a victory and this fourth place is an honorable way to end the day. It’s a well deserve result, knowing that the team was competing at Le Mans for the first time, like René and I. It’s a great reward and I only have one desire : come back even stronger. We focused on avoiding mistakes and we followed our plan : be smart and be patient. My pace was good, I had good stints and not so good stints, with some vibrations. I didn’t imagine I’d experience such difficult moments. I had prepared myself well thankfully. You need time to get used to the circuit. Every bump, every corner…it’s a dream ! "