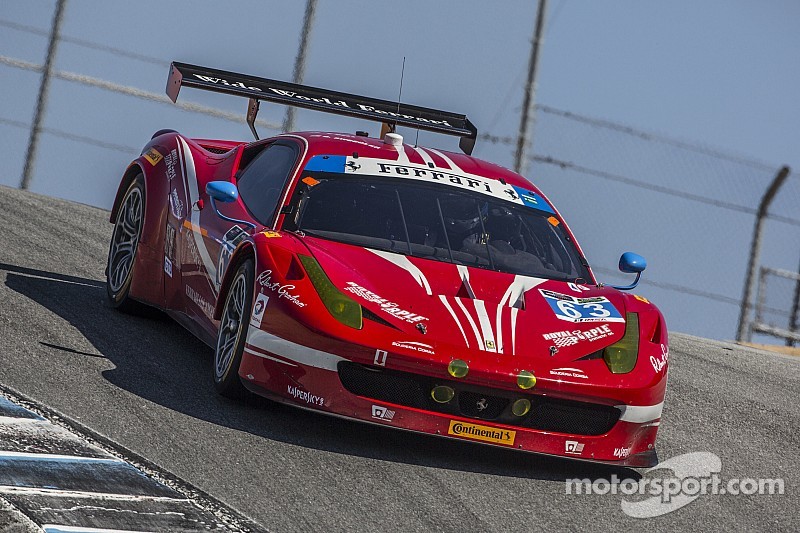 Los Angeles, Calif. - With mere weeks until the start of the 83rd 24 Hours of LeMans, Scuderia Corsa is proud to announce that American driver Jeff Segal will join Bill Sweedler and Townsend Bell in the team's no. 62 Scuderia Corsa Ferrari 458 Italia at this year's endurance classic.

Bill and I have been very fortunate to be aligned with Scuderia Corsa and to be able to bring Jeff on board for LeMans,

Scuderia Corsa's team principals have participated in the 24 Hours of LeMans previously as car owners, but this year's race will mark the first time that their team takes part in the world famous endurance classic. The no. 62 Scuderia Corsa Ferrari 458 Italia will compete in the GT-Am class at this year's race.

"Competing at LeMans was a goal for Scuderia Corsa since we founded the team," said Giacomo Mattioli, team owner of Scuderia Corsa. "To achieve this goal within three years from the start of the operations, it is a tribute to all Scuderia Corsa team members for their dedication and professionalism. To continue the legacy started by Luigi Chinetti, and continued by my friend Giuseppe Risi, is a tremendous honor. I know that with all of the support we will receive from home, our Ferrari may have a little extra speed down the Mulsanne!"

Segal teamed with Sweedler and Bell to win the Rolex 24 at Daytona in 2014 at the wheel of a Ferrari 458 Italia, and joined Scuderia Corsa in their Daytona program this year.

Team will be lone American Ferrari representative at LeMans

"To say that I'm excited or grateful doesn't even begin to describe my feelings on the privilege of competing at the 24 Hours of LeMans," said Segal. "Participating in this famed race was the absolute top goal that I set when I first started out racing karts, and to think that my first attempt will be behind the wheel of a Ferrari - with a top team like Scuderia Corsa, and co-drivers Townsend and Bill - it really just feels like a dream come true. We have a great shared history winning at Daytona with Ferrari last year, and this feels like we're embarking on the next chapter of the story together. I cannot wait to be standing on the LeMans grid in June as part of an all-American Ferrari effort, waving the flag for the Ferrari North America dealers, customers, and supporters."

Sweedler and Bell are currently second in the GT-Daytona driver's championship of TUDOR United SportsCar Championship. After co-driving to victories at the 12 Hours of Sebring and Rolex 24 at Daytona, a victory at LeMans is the next step on their driving resumes.

"It's an honor and a privilege to represent Ferrari, Scuderia Corsa, and the United States at this year's 24 Hours of LeMans," said Sweedler. "As an all-American team, with three American drivers, I could not ask for a more competitive way to go to battle at the greatest endurance race in the world."

"Bill and I have been very fortunate to be aligned with Scuderia Corsa and to be able to bring Jeff on board for LeMans," said Bell. "It will be very special to be a part of this all-American Ferrari effort.. We are a trio of LeMans rookies, but I think we have the potential to do very well and to make this a truly memorable event. It's a very special thing to get the chance to race at LeMans, and we will make the most of it."

Home team: Who are the U.S. drivers racing at Le Mans?