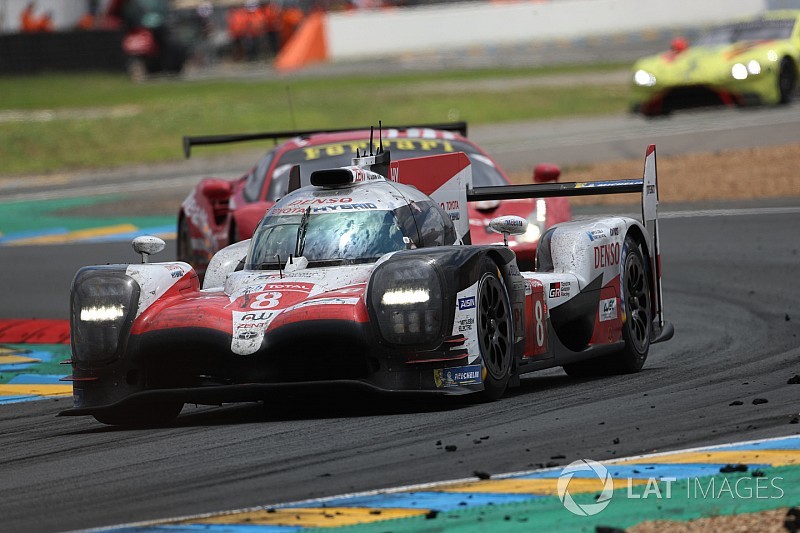 Toyota says it was a "shame" its former World Endurance Championship LMP1 rivals Audi and Toyota were not at Le Mans for the manufacturer's first win in the 24 Hours.

The #8 TS050 HYBRID of Fernando Alonso, Sebastien Buemi and Kazuki Nakajima beat the sister #7 by two laps to finally end Toyota's wait for a victory in the endurance race on Sunday.

Toyota was six minutes from winning in 2016 when Kazuki Nakajima lost power in the #5 car, handing the #2 Porsche victory and giving Audi a podium in its final year at Le Mans.

The Japanese manufacturer also dominated the early part of last year's race before two of its cars suffered technical issues and the third was eliminated in a crash, allowing its only LMP1 manufacturer rival Porsche to recover to win the race.

"We could have skipped what happened to Kamui [Kobayashi, who picked up two late 10-second stop/go penalties in the #7 Toyota after failing to pit on the correct lap], that should not have happened.

"Of course it's a bit of a shame that Audi and Porsche weren't here with us, but this is good enough. We are happy with it."

Leupen added that the victory had not removed the pain of Toyota's recent Le Mans defeats.

"No, no. That's not possible," he said when asked if the victory made up for Toyota's misfortune in recent years.

"But that's the beauty of this experience, it's all part of it and every year is different."

"It took too long basically for us to get this win," said Vasselon.

"Three times in the past we have been very close to making it but every time something exceptional was happening. This time went well."