Onroak Automotive’s cars shone on Sunday under the sun of La Sarthe for the 24 Hours of Le Mans Test Day. The manufacturer’s seven cars, all entered in LM P2, performed well on the circuit, making their final preparations for the big race in two weeks time.

With four Morgan LM P2 and three Ligier JS P2 to manage this weekend, and also for the 24 Hour race, Onroak Automotive affirms its status when it comes to building endurance prototypes.

The new Ligier JS P2 cars are doing well on their first official outing. The Thiriet by TDS Racing Team in particular put this day to good use to get to grips with their new prototype, fitted with a Nissan engine and Dunlop tyres. The Ligier JS P2 – Nissan #35 of G-Drive Racing by OAK Racing, also running on Dunlop tyres, was the fastest of the three Ligier JS P2 on track Sunday, 4th quickest of the LM P2 cars (3:39.191). 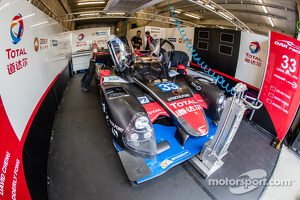 The Morgan LM P2, although already well run cars with a successful track history, having proved themselves last year at Le Mans with a 1-2 victory, took the opportunity to fine tune their setups in preparation for their biggest endurance challenge of the year. For the teams, three of them running on Dunlop tyres, and the fourth out on Michelin tyres, the priority on track was to make sure their cars were running well and that the drivers were ready for the upcoming challenge; they weren’t out to set the fastest times. The #26 G-Drive Racing Morgan - Nissan LM P2 was the quickest of the LM P2 category on Sunday, with a lap of 3:37.795, a good show of strength from the manufacturer.

Without any problems or major issues, the result of the day has been very positive for Onroak Automotive, and for the teams who are running its prototypes. This bodes well for the main event of the 24 Hours of Le Mans, coming up fast in two weeks time!

This test day was industrious for the six teams who are entering our prototypes, which is above all destined to work on the setups and prepare for the 24 Hour race, and which has nevertheless ended with the best time of the class! Indeed, G-Drive Racing has confirmed the potential of the Morgan LM P2, which triumphed during the 2013 race, by setting a lap of 3:37.795. They continued tuning the Ligier JS P2, fitted with the HPD engine, the last car to come out of our workshops, and this, despite an issue with the clutch. All of the teams were very satisfied last night, and that’s what counts the most for us.”