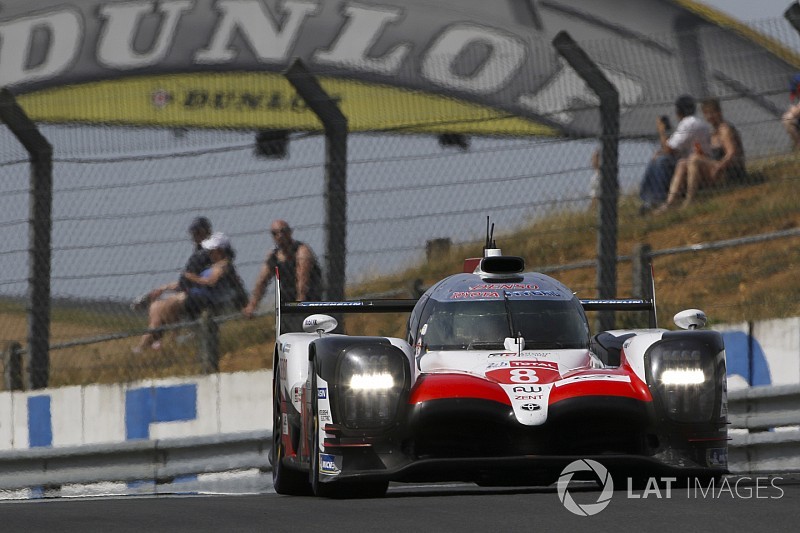 Toyota driver Fernando Alonso topped the times at the official Le Mans 24 Hours test day on his first experience of the track.

The two-time Formula 1 world champion ended up fastest in both sessions in the #8 Toyota TS050 Hybrid he will race in the Le Mans 24 Hours on June 16/17.

Alonso improved on his 3m21.468s morning best in the afternoon with a 3m19.066s to leapfrog back ahead of teammate Kamui Kobayashi by almost a second.

Alonso said: "It was a lot of fun out there - the track is beautiful and fits perfectly with the LMP1s. It was enjoyable for me and we got the info we needed from the test."

The two Toyotas were subsequently split by the best of the LMP1 privateers, the #3 Rebellion R-13-Gibson driven Mathias Beche.

The Swiss driver's 3m19.780s left him only seventh tenths down on Alonso in the final classification.

Andre Lotterer jumped to fourth with a 3m21.334s in the second of the Rebellions in the final 15 minutes.

That leapfrogged him ahead of the two SMP Racing BR Engineering BR1-AERs, which took fifth and sixth in the hands of Vitaly Petrov and Stephane Sarrazin respectively.

DragonSpeed moved to the top of the LMP2 times late in the afternoon with a 3m27.228s from Nathanael Berthon aboard its Oreca-Gibson 07.

That put him just two hundredths ahead of the IDEC Sport Oreca driven by Paul-Loup Chatin.

The G-Drive Oreca that had topped the class in the morning ended up third with a 3m28.394s from Jean-Eric Vergne.

Porsche jumped ahead of Ford in the GTE Pro times in the afternoon session.

Patrick Pilet ended up fastest in the #91 CORE autosport-run 911 RSR with a 3m52.647s, which put him less than a tenth up on Gianmaria Bruni in the best of the WEC entries from Porsche.

Andy Priaulx's morning best of 3m53.008s for the British-based Ganassi Ford squad left him third ahead of teammate Olivier Pla, who improved to 3m53.052s in the afternoon.

The four Fords and Porsche's pair of full-season WEC entries locked out the top six positions in the class.

Best of the rest was BMW driver Nicky Catsburg with a 3m53.946s aboard his MTEK-run M8 GTE.

The Dempsey-Proton Porsche squad moved to the top of the GTE Am times right at the end of the afternoon session, which was brought to a premature end a couple of minutes early with the fourth red flag of the day.