Exceptional cars and top-line drivers plus stars will be ready for the 90th Anniversary of the 24 Hours of Le Mans.

A fantastic field of cars will race in the 2013 Le Mans 24 Hours! The 90th anniversary of the event will be celebrated in the style it deserves with the Audi-Toyota duel topping the bill hounded by the reboosted private teams. In LM P2, there will be a no-holds battle between even-matched squads, while in LM GTE the fight looks like being of an intensity rarely seen in the Sarthe with entries from five manufacturers! Exceptional cars and top-line drivers plus stars beginning with Patrick Dempsey and Sébastien Loeb plus prestigious events - once again the Le Mans 24 Hours will be the biggest and best race of the world motor sport season!

On 22-23 June, the Le Mans 24 Hours will celebrate their 90th anniversary. But above and beyond the appropriate commemorations, to which the Automobile Club de l’Ouest will invite spectators and partners, lies a modern, exciting event that is resolutely future-oriented although its roots lie in a famous past.

The Le Mans 24 Hours race is unique and this explains its amazing longevity!

This undoubtedly helps explain the interest that the 3rd round of the 2013 FIA World Endurance Championship has generated yet again. This year the Le Mans 24 Hours have attracted another exceptional field as confirmed by the list of 56 entries and 10 reserves (for 71 entry forms received), announced this afternoon during a press conference in Paris in the Eurosites-George V premises. This was shown live on the new Le Mans 24-Hours internet site with the help of Michelin.

In what is a difficult economic context the major car manufacturers in the world continue to flock to Le Mans, Toyota, VAG (thanks to Audi and Porsche back again with a works team) and General Motors (with Corvette) still put their trust in a unique race to showcase their sporting prowess and the reliability of their cars. The Renault-Nissan Group will be even more strongly represented than in the past thanks to the 17 cars in LM P2 powered by the Japanese manufacturer. Honda is still present through its competition branch, Honda Performance Development. To these major manufacturers can be added the smaller-scale, but highly-prestigious car companies like Ferrari, Aston Martin, which will celebrate its centenary, Viper, Lotus and Morgan, as well as skilled prototype constructors: Oreca, Lola and Zytek.

At the head of the field there will be an all-out duel between the Audi and Toyota prototypes, with private teams Rebellion Racing and Strakka Racing taking the fight to the big boys thanks to the competitiveness of their cars having been improved by the recent regulation tweaks. 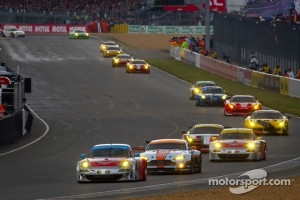 LM P2 has attracted 22 entries and never have there been so many evenly-matched cars in this category, 90% of which are potential victory contenders. LM GTE has undergone a remarkable revival of interest with five manufacturers entering works cars, as in addition to Corvette, Ferrari and Aston Martin, Porsche and Viper are back on an official basis. In LM GTE AM, 3-time winner on the trot Larbre Competition and its Corvettes will be up against even tougher rivals.

In the 56th pit allocated to an innovative car, the GreenGT H2 prototype will take pride of place as it will be powered by hydrogen fuel, which only emits water vapour!

The drivers too are from the top drawer. While awaiting the announcements of the exact composition of all the line-ups – at the time of entry the teams are obliged to give the name of one driver per car – the list published today shows that the best in the world still love coming back to race in the event. On the list are many former winners of the great endurance classic including Kristensen, Gené, Wurz and other well-known names like Montagny, Davidson, Mailleux, Fisichella, Prost, Jani, Pla, Lamy, Mücke, etc, as well as the 2012 World Endurance Champions and two-time winners of the race – Benoït Tréluyer, André Loterer and Marcel Fässler!

Finally, what would the Le Mans 24 Hours be without stars and glamour? This year two big stars have already announced their presence: Sébastien Loeb as team manager of his own squad (Sébastien Loeb Racing) and Patrick Dempsey. The American actor, who will be on the grid again, is a great motor racing enthusiast and he is following in the footsteps of Paul Newman and Jean-Louis Trintignant.

Ten reserves (six LM Ps and four LM GTEs) have also been selected to replace any withdrawals. The Le Mans 24 Hours is an international race and teams from 14 different countries (15 if the squad from Luxembourg the LM P reserve makes it onto the grid) have entered for it including the Chinese team KCMG, also participating in the Asian Le Mans Series, with drivers from 20 different countries. 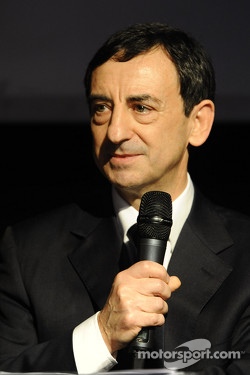 Pierre Fillon, President of the Automobile Club de l’Ouest: “Once again the Le Mans 24-Hours race shows its appeal thanks to an idea that although it may be 90 years old, is more modern than ever. This event is the best test bed in the world, and the major manufacturers know this better than anybody as they put their trust in our race year after year. In terms of prestige no other event matches it, which is why the best drivers in the world flock to the Sarthe. There is no better laboratory, proof of which is that in the 56th pit - there will be a car that emits only steam into the atmosphere! The Le Mans 24 Hours race is unique and this explains its amazing longevity!”

Vincent Beaumesnil, Sports Manager of the Automobile Club de l’Ouest: “We can only be delighted after a quick analysis of the 2013 field because of the on-track battles it promises. Toyota is no longer the debutant seen at Le Mans in 2012, but a team that is well armed to topple Audi, which has matchless experience. Thanks to the evolutions of the regulations decided by the ACO, the LM P1 privateers will be in a position to take the fight to the works teams at the front of the field. In the LM P2 category, the most heavily-subscribed for this year’s race, the vast majority of the entrants can win. And we’re very happy to see a Chinese team getting involved in the battle just when we’re launching the Asian Le Mans Series this year. Finally, never has there been such a high level of competitiveness in GT. Five manufacturers will go at it hammer and tongs with works cars for victory. 2013 is an historic year for the Le Mans 24 Hours, and all the ingredients are in place to make it an event that will leave its mark on the history of the event.”

Official entry list for the 2013 24 Hours of Le Mans, updated with second and third driver (based on the information we have)