The LM P1 class has not only a bumper crop of entrants -- twenty in all -- at this year's Le Mans 24H, but the strongest set of works entries in years, from Aston Martin, Audi and Peugeot. Each of the three factory teams has entered three cars, ...

The LM P1 class has not only a bumper crop of entrants -- twenty in all -- at this year's Le Mans 24H, but the strongest set of works entries in years, from Aston Martin, Audi and Peugeot. Each of the three factory teams has entered three cars, with varying mixes of experience and speed, in trying to secure the victory in the June endurance classic. 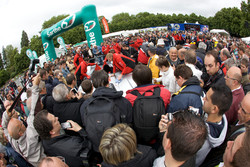 Audi and Peugeot, which both use 5.5-litre turbodiesel engines, were clearly the class of the field last year, with Peugeot having the edge in pure speed, but Audi taking the overall victory thanks to a combination of clever strategy and wet-weather performance.

Audi has the new R15 TDI this year, which should address some of the performance gap that last year's R10 had relative to the Peugeots, and a trio of strong driver groupings. The fastest of the Audi crews should be the group of young lions -- Timo Bernhard, Romain Dumas and Alexandre Premat will be driving the #3 -- the first time the three have driven together for Audi. Meanwhile the #2 has the all-German crew of Lucas Luhr, Mike Rockenfeller and Marco Werner.

The #1 Audi might not have quite the outright speed of its sister car, but the 2008 race-winning crew of Tom Kristensen, Rinaldo "Dindo" Capello and Allan McNish brings both experience and racecraft; between the three of them, they have the highly impressive total of 12 Le Mans overall victories, eight of those by Kristensen. And they did clinch the pole position (and victory) at the R15's debut race, the Twelve Hours of Sebring.

Peugeot chose to continue the development of its 2007 pole-winning 908 HDi FAP instead of building a new car, and the 908 has certainly run strongly at the Sebring 12H and in the Le Mans Series so far this year. For Le Mans, Peugeot, too, has chosen a teaming with three fast, young drivers: Nicolas Minassian, Pedro Lamy and Christian Klien in the #7 car.

The #8 features three French drivers -- Sebastien Bourdais, Franck Montagny and Stephane Sarrazin -- and the French team, too, has chosen to go with an experienced crew for the third car. David Brabham, Marc Gene and Alexander Wurz combine in the #9 Peugeot, and will also be a force to be reckoned with.

Aston Martin, which did not enter the 24H event last year, instead uses a six-litre normally aspirated gasoline (petrol) engine in a Lola B09/60 closed-top chassis. Last year the Charouz Lola B08/60-Aston Martin entry, supported by the factory, qualified sixth, 6.645 seconds off the pole position but only 1.311 seconds behind the fastest of the Audi R10s.

This year, though, the ACO has adjusted the gasoline-diesel balance, decreasing the size of the fuel tank flow limiter for the turbodiesels from 38 mm to 33 mm, and adding 30 kg of ballast to the diesel-powered cars. The new ballast hit Audi particularly hard, as the new R15 chassis design had scant space for additional ballast.

The changes have certainly reduced the gap to the front-running diesels, but it's difficult to judge the effect at Le Mans from the single Le Mans Series race since the change, at Spa-Francorchamps, due to the differing nature of the tracks.

However, it is promising to note that at Spa the top Aston Martin finished just a lap behind the winning Peugeot, and qualified just 1.4 seconds off the French team's pole position time, compared to 4.4 seconds last year.

Of the three Aston Martin entries, it may be the AMR Eastern Europe-entered #007 car that has the best chance of upsetting the Audi and Peugeot applecarts. Jan Charouz and Stefan Mucke, who have been developing the Lola-Aston Martin package over the past two seasons, are both quick, and for the 24H, the always-strong Tomas Enge joins the team.

The #008, with Anthony Davidson, Darren Turner and Jos Verstappen should also be strong, though most of this will Davidson's first racing experience in a sports car and while Turner has driven at both Le Mans and Daytona 24H teams, he hasn't driven a P1 car before, either.

Each of the factories is also supporting one customer team: Kolles Racing for Audi, Pescarolo Sport for Peugeot and Speedy Racing Team for Aston Martin.

Kolles is running a pair of the 2008-race-winning Audi R10s, the #14 with Narain Karthikeyan and Charles Zwolsman, and the #15 with Christijan Albers, Christian Bakkerud and Giorgio Mondini. The R10 is still a very fast -- and reliable -- car, and the Kolles team has Audi factory support for the pair, but the team's driver line-up doesn't have the level of experience that the works Audi and Peugeot teams do. Still, in 24 hours anything can happen, and the team might well be able to challenge for a podium position.

Henri Pescarolo, the winner of the ACO's lifetime achievement award in 2007, again has Pescarolo Sport with two entries at the 24H, but this time only one of them is a Pescarolo traditional Pescarolo-Judd; the news is the #17, a factory-supported Peugeot 908 HDi FAP, with Benoit Treluyer, Jean-Christophe Boullion and Simon Pagenaud. The team's biggest handicap will be the limited track time to date compared to the factory cars.

Finally, Speedy Racing has a Lola B08/60-Aston Martin, alongside the team's P2 entry (a Lola B08/80-Judd). The chassis is an older evolution of the B09/60 used by the factory team, but Speedy has a hungry lineup of fast young drivers in Andrea Belicchi, Nicolas Prost and Neel Jani, and will be keen to show performance on par with the works entries.

There are six more privateer entries, including a Creation Judd, two Ginetta Zyteks, two Oreca-AIMs and one Courage-Judd, ensuring that the P1 class alone should provide a highly exciting race for the quarter-million fans expected at the track on race day.