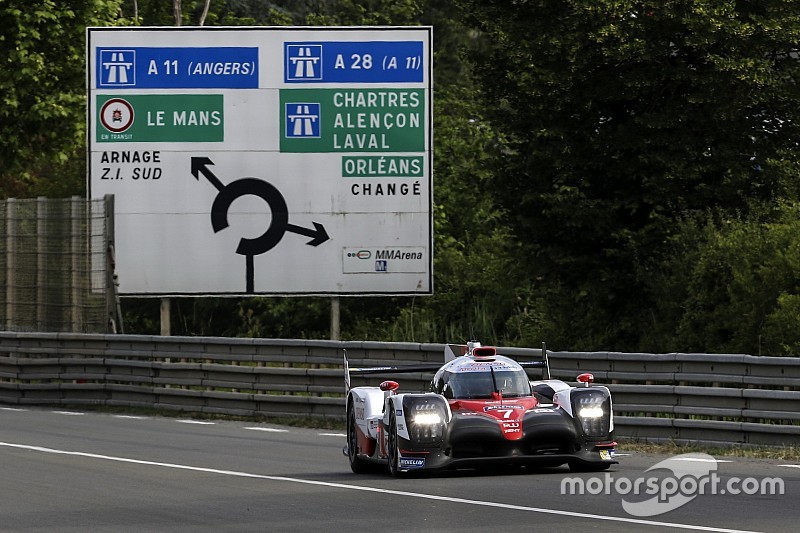 Toyota has admitted that it has emerged as favourite for victory in this weekend's Le Mans 24 Hours prior to the start of practice and qualifying on Wednesday.

The Japanese manufacturer believes that its performance in the official pre-race test at Le Mans earlier this month has installed it in that position ahead of Porsche.

Asked if Toyota was now favourite, Toyota Motorsport GmbH technical director Pascal Vasselon said: "After the test it is difficult to say that we are not favourites.

"That is what we have been working for. We don’t think it is possible to say that we are not looking reasonably okay."

Toyota blocked out the top three positions in the times at the test on the full Le Mans circuit on the first weekend of June.

Kamui Kobayashi's 3m18.132s in the best of the three TS050 Hybrids was more than three seconds clear of the fastest of the two Porsche 919 Hybrids.

Porsche LMP1 team principal Andreas Seidl admitted in the wake of the test that Toyota's times were out of reach.

"Could we match the pace of the Toyota today? Impossible," he said. "That was something we couldn't do."

Vasselon explained that Toyota was in a stronger position heading into race week than 12 months ago, when it eventually came within six minutes of a first Le Mans victory.

"Last year clearly at the test day we were not at full attack, and then in race week we came up to speed," he said.

"This year, I would say, we are plateauing at a high level earlier.”

Toyota might have claimed what appears to be a welcome tag of pre-event favourite, but Le Mans last year proved that it can be rash to make early judgements about the race.

Toyota wasn't on the pace at the test in 2016. Yet it went away, did its work and ended up with a car that had a measure of the Porsche in the race, most crucially when it mattered on Sunday morning.

The question is whether Porsche can make similar gains 12 months on.

The TS050 Hybrid was a very new car 12 months ago and Toyota on a steep learning curve with the new technologies – a twin-turbo direct injection V6 engine and a lithium-ion battery – it had introduced at the start of the season.

That contrasts with Porsche's position today. The second-generation 919 is now in its third season, so any gains are inevitably going to be smaller.