Toyota’s Mike Conway admits he’s “gutted” to miss out on Le Mans 24 Hours victory once again with his #7 teammates, who lost the lead of the race due to a turbo problem just after half distance that ultimately restricted it to a third-placed finish. 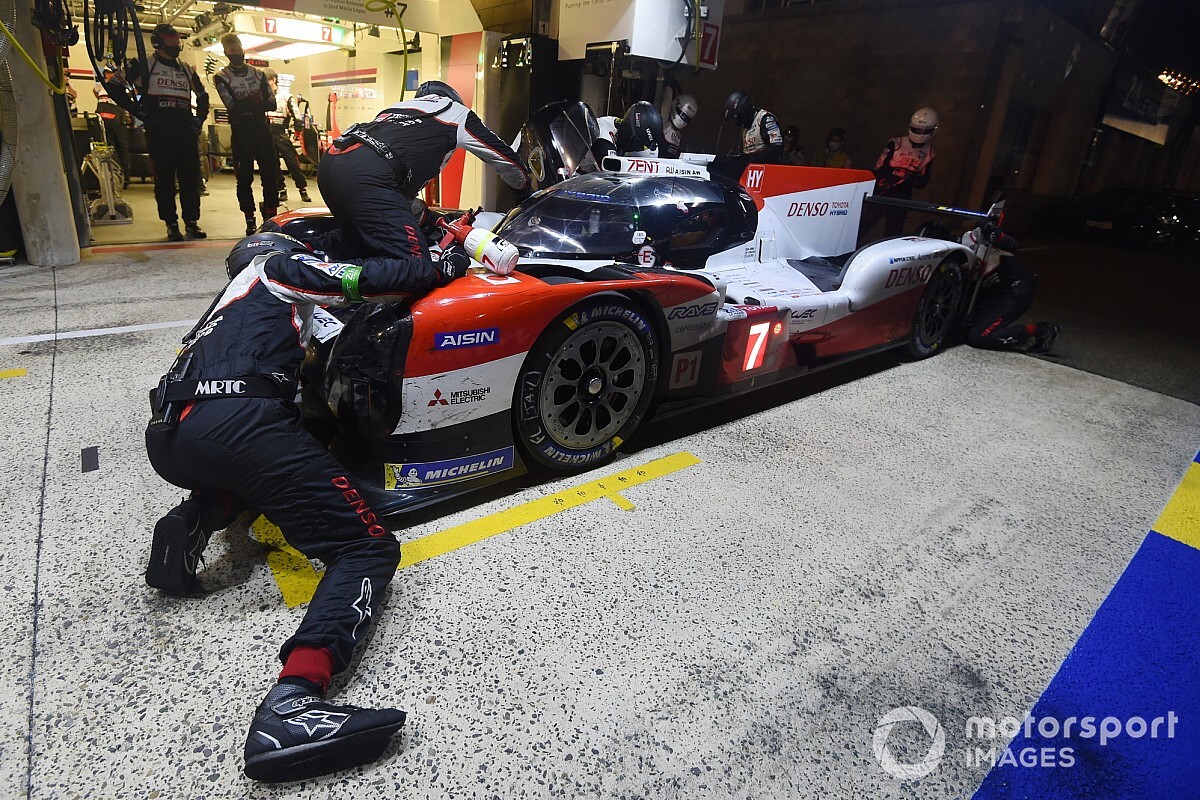 Kamui Kobayashi was at the wheel as the race ticked into its 13th hour when he received a radio message reporting a right-side turbo problem. After a slow lap, the decision was made to pit the car and replace the turbo, which cost the squad half an hour.

It meant the #8 car was released to score its third Le Mans win on the trot and take control of the FIA World Endurance Championship standings too.

“This place hasn’t been the kindest to us at times,” rued Conway. “Three wins on the trot for the team, we’ve got to be happy about that for the team, but on our side of the garage we just feel like another one got away from us.

“We’re sad about that, obviously, and it’ll take some time to get over it. Especially with the championship as well, it changes things around massively. Two big hits in one race is pretty gutting.

“We come here and do a good job every time, but it’s just some little things that stop us from getting that win. My teammates always do a mega job when they’re in the car, and the team works as hard as it can to get two cars to the finish line. I guess we gotta come back and try again next year, but we keep saying it! Just gutted that we couldn’t do it this time.”

The #7 Toyota’s finishing record at Le Mans has been second place in 2016 (when it was the #6), ’18 and ’19, and when told of its streak Kobayashi quipped: “When I hear that, we should be second again, just to keep the tradition! Being third is a big surprise but we tried hard and to be always fast, but it’s hard at Le Mans.

“I think we did our best job, but what happened was a shame. We didn’t expect that happening, because we did so much mileage and we were definitely confident that we wouldn’t have this kind of problem. Everybody did a great job, I would say, nothing seriously negative, it’s just tough, but this is Le Mans at the end.”

The car’s third driver, Jose Maria Lopez, believes the #7 had the measure of its winning sister car on pace, but said there is “no regret” over the outcome of falling short once again.

He said: “From my side, the only thing I can do is look at the positives and job we had to do. Mike and Kamui did a fantastic job, I did my part, we did nearly the perfect job with the engineers but some things you cannot manage. You can’t handle, it’s just something that happened. There is no regret.

“Of course, we’re feeling disappointed, for the second year we were the fastest car out there, and when you cannot do it, it’s frustrating, but it will take a few days. The positive thing is we will have to wait less [time] for the next Le Mans as well. Not a year, maybe nine months.”